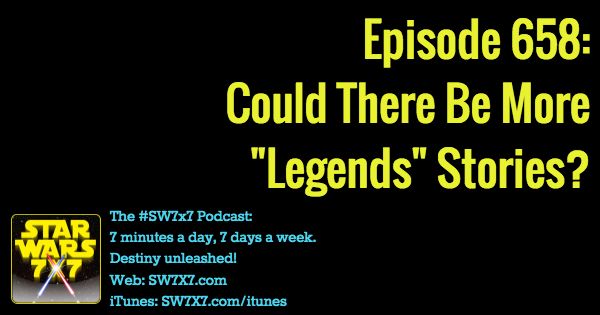 So, here’s a pretty public bit of lobbying that went live in San Francisco this week:


This, naturally, has fired up both sides of the debate as to whether the old Expanded Universe (EU) should continue to be populated with new stories. Most of the discussion has been respectful (Star Wars fans, like many other passionate people with fandoms to defend, have a lot to say about controversial topics like this one), but it can get a bit heated at times, too.

But let’s skip over that ugliness and consider the question of whether Disney would even entertain the idea of publishing more EU (now called “Legends”) stories. Star Wars novelist Chuck Wendig makes a great case for why they wouldn’t publish more – and among his ideas, the most compelling is that of brand confusion, something the powers that be are certainly going to want to limit at worst, and eliminate them at best. In Wendig’s words:

That larger narrative is actually part of the problem for “Legends” — it’s quite a big deal that, at present, everything coming out regarding Star Wars is connected. That’s not true really with anything else, I don’t believe, at least not at this scale. It is all, relatively-speaking, “canon.” To suddenly introduce these other stories that aren’t connected opens Disney up to branding confusion. People yelling at them on social about how they thought Han and Leia had only one kid and is Rey actually Jaina and wait is Kylo and the Knights of Ren in these books and HOLD UP IS MARA JADE REY’S MOM. You’re fans, so you understand the difference. But the average reader doesn’t see the difference. They have a limited view of canon and think that if they pick up a new Star Wars book it’ll probably connect to the movies or the other new books. When that fails, that creates disappointment.

Disney probably wants to avoid branding confusion. At all costs. At least until all the movies are out and that part of the story has been told.

Personally, though, I think there’s a third way out of this. Since writers are allowed to cherry pick the elements of the story they want to tell now based on what they find in the old EU, why couldn’t the Story Group pick a selection of very popular Star Wars books and comic book storylines, and essentially re-canonize them? That way, some of the classics can come back without disturbing the new timeline!

What do YOU think of all this? Share your thoughts in the comments!