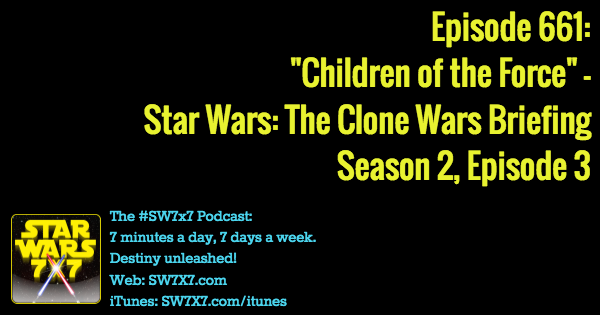 Welcome to this week’s Star Wars: The Clone Wars Briefing! This time, we’re taking on Season 2, Episode 3, “Children of the Force. (Image via Wookieepedia)

So, we pick right up where we left off with the last episode. Cad Bane, disguised as a clone trooper, manages to steal a ship and make good his escape with the unlocked Jedi holocron. D’oh!

What do the Jedi do about it? Meditate! That’s right … the holocron contains the names of thousands of Force-sensitive kids throughout the galaxy. So Obi, Ani, Mace, and Yoda concentrate to see if they can divine in which ones Cad Bane would be interested.

Obi gets to Rodia too late to make the first rescue, but Anakin and Ahsoka prevent the kidnapping of a Force-sensitive Gungan baby and capture Cad Bane.

Later, we find out that Darth Sidious wants to babies for experiments, to create a set of spies that can keep watch over the galaxy for Sidious. Delegation is the key to success, after all.

But the Jedi track down where the babies went, and it turns out to be Mustafar! So, Revenge of the Sith wasn’t Anakin’s first time there, after all. They rescue the babies, so all’s well that ends well!

Meanwhile, despite knowing its a trap, Obi and Mace go with Bane to where he says the holocron is. And it’s there, but so are a bunch of other booby traps. Ooops! In order to save their own skin and the holocron, they have to let Bane skip town again. I’m beginning to think of this Cad Bane guy as a genius-level intellect, for all the scrapes with the Republic he’s had.