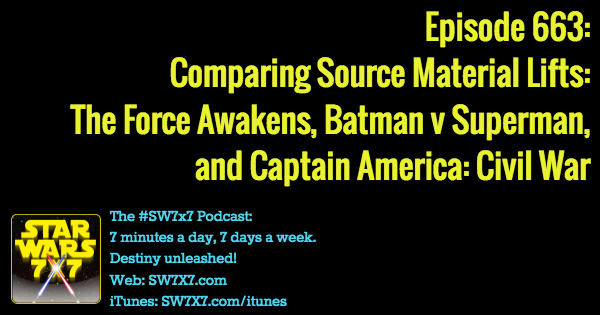 As we mentioned in the podcast, Batman v Superman director Zach Snyder has said that the seminal Dark Knight Returns comic series served as a visual reference for the film, and nothing more.

Turns out that’s not so true. Check out this list Cinema Blend compiled of elements that go beyond mere visual reference to outright lifting of ideas, concepts, and dialogue.

Yes, dialogue! When Bruce Wayne tells Alfred early in the movie, “We’ve always been criminals,” that’s a line in The Dark Knight Returns, which Superman attributes to Batman from a meeting years ago, which Superman is recalling as part of that story. And there are other ones, too.

Contrast that to The Force Awakens, which, despite all the protesting about how much it was similar to the original Star Wars in plot points, director J.J. Abrams got on the stump and said that it was intentionally done that way, to evoke the original galaxy far, far away in the best and most idealized and idealistic and accessible way possible (I’m paraphrasing, but you get the idea.)

What do YOU think? Do you think Lucasfilm is right in this situation of “borrowing” from other source material, or do you think Warner Brothers’s take is the acceptable one.

Yesterday’s answer: “May the Force be with you.”

Today’s question: What are Rey’s last words in The Force Awakens?