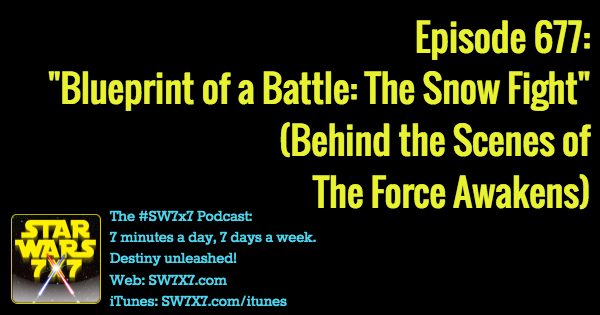 We’re continuing our series of looks at the behind-the-scenes material of The Force Awakens home video release! Today, it’s “Blueprint of a Battle: The Snow Fight,” and there’s a heck of a lot to talk about.

This is one of the ones I was a bit disappointed in, but that’s more on me, I think, than it is on the producers. I thought, based on the title, I’d be seeing how they choreographed Rey, Finn, and Kylo’s fight and path through the forest they built on the set of Pinewood Studios. Turns out “no,” that instead they’re talking just a bit about that (if at all, really), and much more about the set building. Which is utterly fascinating in its own right, to be sure! But yeah, I wanted more fight choreography. 🙂

There’s still a lot to listen to in this episode, so check it out! And subscribe on your favorite podcasting app if you haven’t already, so you get every episode of Star Wars 7×7 the moment they’re released.

Today’s question: What’s the first line of dialogue spoken in Attack of the Clones?