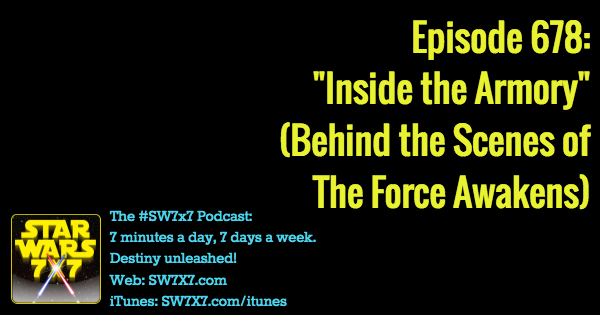 More from behind the scenes of The Force Awakens! This time the folks from Lucasfilm take us “Inside the Armory,” where we’ll get to see the weapon-making process for outfitting the troops of the First Order and the Resistance, as well as our heroes (Rey, Han, and Chewie).

And of course, OF COURSE, what conversation about Star Wars weapons would be complete without a discussion of lightsabers? You’ll get to hear from J.J. Abrams, Daisy Ridley, and Adam Driver in the “Inside the Armory” video that’s included with the home video release of The Force Awakens, including one very illuminating quote from Adam Driver (which we excerpt for today’s show) about how Kylo Ren’s lightsaber is a reflection of the character himself.

In fact, you should also know that the comment incites a bit of an aside about Star Wars: Bloodline, the new novel by Claudia Gray. It is a spoiler-level conversation, so if you haven’t read the book and still plan to, then be ready to skip ahead one minute in the podcast from where we first mention it. Don’t worry, you get a decent warning! 🙂

Naturally, there’s a lot of talk about making things “retro” and “basic” and not too futuristic. The team developing the weapons were working from a lot of source material from the Original Trilogy, and using that information to update the designs while still making them feel like they’re in a Star Wars universe. And in a nod to how technology has changed since the making of even the Prequel Trilogy, you’ll get a look at the 3D printers they were using to create some of the weapons, as well as Rey’s quarterstaff – some of the largest large-format 3D printers in the world, so they tell us.

Today’s question: What’s the last line of dialogue in Attack of the Clones?