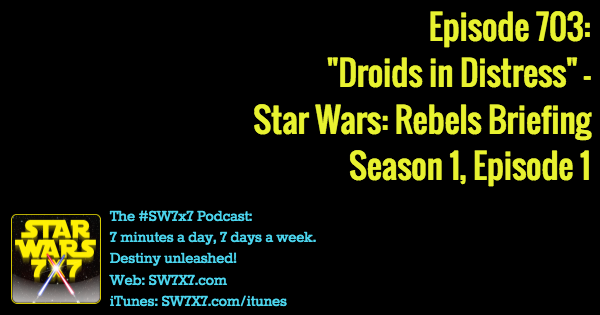 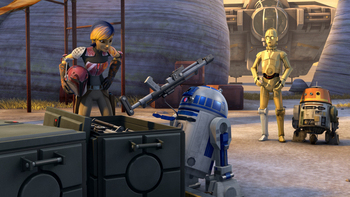 Welcome to the latest Star Wars: Rebels Briefing! Today we’re covering the real Season 1, Episode 1 (“Spark of Rebellion” was a “movie premiere, despite being only an hour long including commercials). (Photo via Wookieepedia – click here for the full episode guide!)

This one is “Droids in Distress,” and features the first appearance of C-3PO, R2-D2, and Bail Organa. It’s like having super popular guest stars in your first few episodes to try to get people interested and get the show off the ground.

Turns out the two droids are actually on a secret mission for Bail Organa to keep the weapons from falling into Imperial hands. So why, oh why, despite a statement about having him fitted with a restraining bolt, and the knowledge that he’s really working for the rebels, does Threepio commit the boneheaded move of sending a distress signal to the Empire?

Sure, they’ve bene kidnapped by “thieves” – the Ghost crew – but why wouldn’t Threepio have called Bail Organa instead? Was he so freaked out by being kidnapped that he forgot himself? Was he so deep undercover that he thought keeping up appearances was the thing to do, and so reported as though he were still an Imperial. No, I can’t convince myself of either scenario, especially when they talked about putting a restraining bolt on him. I think it’s a plot hole you can drive a truck through.

That said, it’s still plenty action-packed and moves along quickly story-wise, and it’s always nice to see Artoo taking care of business by overloading the weapons in the shipment so they can’t be used by bad people with bad ideas. 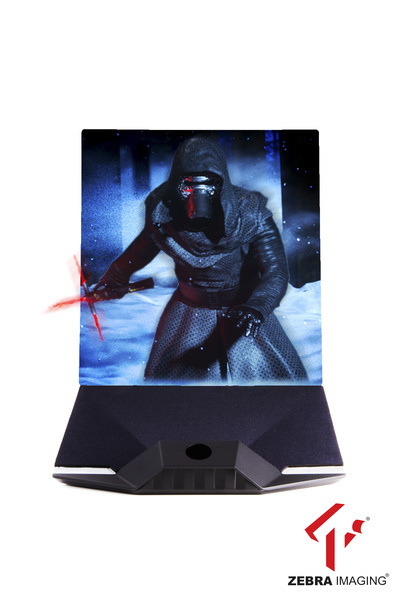 This episode of the podcast is brought to you by Zebra Imaging. Look, I’m not a bad-guy guy, but you have to admit, the Kylo Ren hologram is stunning, despite the fact that it’s hard to convey just how awesome a Star Wars 3D Hologram is on a 2D webpage. You can still feel the energy and power radiating from him!

For a newcomer, Kylo is hugely popular – it took his grandfather, Darth Vader, to take him down in the Star Wars “This Is Madness” character tournament this year, meaning he came in second place out of all the bad guys (against a roster that included Boba Fett, Darth Maul, and more). It is, quite literally, like having the character come to life right in front of you. Check out Zebra Imaging’s Star Wars 3D holograms for more details!

Today’s question: What do Han, Finn, and Chewie do with Phasma after they’re done with her?