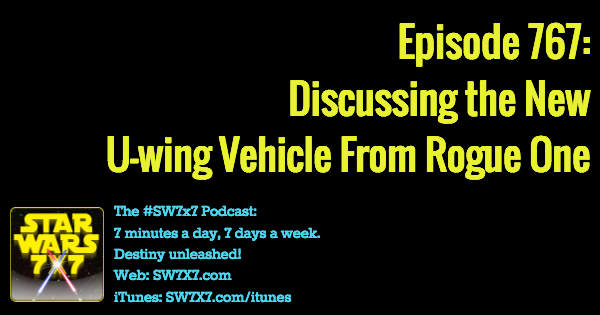 On last week’s Star Wars Show (and the newly christened Star Wars After Show), viewers got a look at a production photo of the U-wing troop transport, as well as reference animation from ILM that shows the Incom UT-60D (yes, that’s the official technical name) with its wings pointed forward and scooped back, showing off the dual configurations that allow the ship to swoop into heavy fire zones, drop troops off, and zoom back out without getting blown up.

We’ve got screenshots from the Star Wars Show for you here, and a discussion of the U-wing on the podcast. What do YOU think of the new ship? Have your say in the comments!

Yesterday’s answer: Mind reading, telekinesis, freezing people and energy, knocking people unconscious (you could make a case for a Force push, but it’s not clear if what he did to Rey was a push or a telekinetic lift), and mind torture (while extracting mind-reading info), but at least four confirmed for sure!

Today’s question: Can you name the Force powers Rey demonstrates in The Force Awakens?