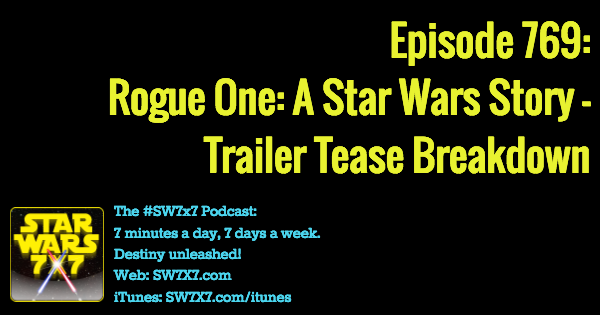 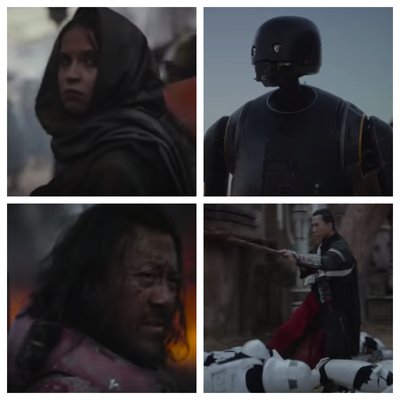 Pictured from the tease, clockwise from top left: Felicity Jones as Jyn Erso; K-2SO; Donnie Yen as Chirrut Imwe; and Jiang Wen as Baze Malbus. All of those shots are “new,” with the exception of the shot of K-2SO, which was shown to the audience at Star Wars Celebration Europe – not as part of the behind-the-scenes reel, but as part of footage that was dropped into the middle of the panel discussion as Gwendoline Christie was interviewing Alan Tudyk, the performer voicing and doing motion capture for Kay-Too.

We’ve got the shot-by-shot breakdown for you in today’s episode, and here’s the question of the day. We’ve seen shots of Baze and Chirrut on Scarif with fire in the background, but pacing or sitting, which suggests there’s a break in the action someplace. Do you think the scenes of the AC-ACTs firing on the Rebels are separate/take place later after the shots of the Death Troopers firing and the shuttle exploding? Have your say in the comments!

Today’s question: How long has Maz’s castle/bar been in operation?