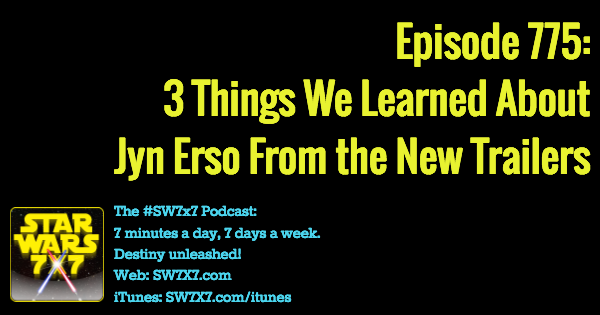 There have been five sets of Rogue One footage released so far:

1. The teaser trailer from April

2. The behind-the-scenes reel from July

4. The trailer debuted during the Olympics

Since most people haven’t seen the footage from Celebration Europe, I’m not going to count that as stuff people already know, and only mention that the pep talk we hear Jyn Erso deliver in the new footage this month, about having a chance to make a difference, was previously included in that Celebration Europe footage.

That said, let’s look at what 4 and 5 above revealed to us about Jyn Erso that we didn’t already know about from 1 and 2 above.

1. Jyn’s a true believer. All that talk about making a difference? We didn’t know she had that in her. We only knew that she was aggressive and rebellious, but that could have been something she has against authority of any kind. Turns out she has a much more developed sense of rebellion.

2. Jyn’s on Jedha to recruit team members – and possibly Saw Gerrera specifically. Previously, all we could say for sure is that she was there as part of her mission to find out about what’s going on with this “weapons test” the Rebels have heard about. But the pitch she gives Saw Gerrera about making a difference proves that she didn’t just come to Jedha for the permafrost climate.

In the new footage, Cassian makes it clear he wants to help her, and later in the trailer, mentions that he’s been recruiting for the Rebellion for a long time. That seems to support the recruitment idea further.

And I’ll go one further, into the land of presumption. I think it’s possible Jyn and Saw know each other, and she’s on Jedha to recruit him and others in his rebel cell. If Saw has been fighting this long, it’s clear he knows how to keep hidden, and wouldn’t be likely to accept visits from people he doesn’t already know. Of course, it’s also possible that Chirrut and Baze, after rescuing Jyn and Cassian from the Imperials, take Jyn and Cassian to Saw. But I like the previous knowledge idea a lot.

3. Jyn’s expecting to be punished by the Rebels – and surprised she isn’t. It’s one thing to arrive in shackles and hear her rap sheet laid out. It’s another thing to be questioned about whether she can be trusted without her shackles, and for her to talk about getting things over with in a resigned tone. Then the look on her face when Mon Mothma tells her they have a mission for her. Surprise and curiosity, but dialed down. Not at all what she was expecting to hear.

Here’s where I’ll go one further again. What are the chances that Cassian recruited her, too? Which, considering her record, might have made Alistar Petrie’s Rebel Officer very wary of her. Cassian knew the intercepted Imperial transmission had come from Jyn’s father, and he waited to reveal that information until she was with the Rebels. Did he capture her and wait to tell her, or did he break her out of some facility or transport? Seems like an unusual form of “recruitment,” but seems plausible in its way.

Meanwhile, what did YOU learn about Jyn Erso from the new footage? Share your thoughts in the comments!

Yesterday’s answer: In the left side, or in the thermal oscillator building – either answer works!

Today’s question: What unusual thing does Kylo do to his laser blast wound?