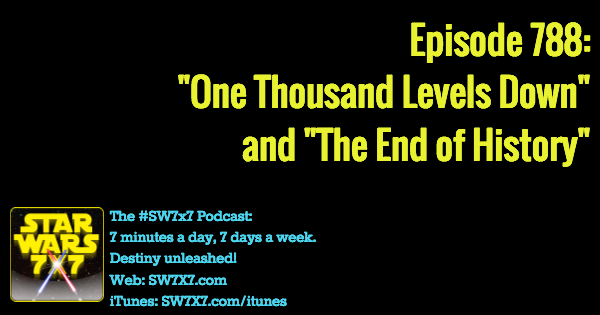 “One Thousand Stories Down” tells the tale of two Alderaanean kids, now living on Coruscant. After the destruction of Alderaan, the Empire starts harassing and arresting Alderaaneans, and these two have to find a way to survive after their mother is taken in.

In “The End of History,” a Corellian rebel crash lands on what the Empire thinks is an unoccupied moon, but it’s actually occupied by a former antiques dealer who’s managed to hide and preserve a bunch of Jedi artifacts. Taking place in between Revenge of the Sith and A New Hope, the story revolves around a dilemma. If the antiques dealer gives the rebel a ship to escape, the Empire will know the moon is occupied and destroy the Jedi archive. If the rebel waits to escape until the Empire leaves, she won’t be able to inform the rebels on Corellia that an Imperial purge is coming, and lots of folks will die.

Check out the podcast for the rest of the story! And yes, it’s full spoiler mode on today’s episode – you’ve been warned. 🙂

Today’s question: What’s different about the explosion of Starkiller Base, as compared to the explosions of the Death Stars?