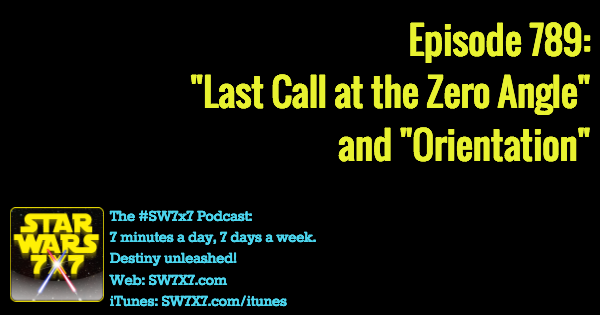 Time for another look at Star Wars short fiction! By the way, as we go through these, we’re also updating our timeline of the new Star Wars canon, dropping the stories into their correct places – or, as far as we know them. Today’s entries, “Last Call at the Zero Angle” and “Orientation,” have clearly defined markers. “Last Call” makes reference in the story to the destruction of the first Death Star. And “Orientation” is labeled in the magazine as a precursor to Paul Kemp’s novel Lords of the Sith. So far, the only one with a less-than-precise date attached to it is “The End of History,” which author Alexander Freed *thinks* takes place around 10 BBY, give or take a few years.

Meanwhile, in today’s show, we’re discussing “Last Call at the Zero Angle” by Jason Fry, which reveals a bunch about TIE pilots you never knew; and “Orientation” by John Jackson Miller, where even though the Emperor and Darth Vader are the headliners, no small excitement comes from getting to meet an old friend at the beginning of her career – Cadet Rae Sloane, who pulls off one of her first heroic feats.

Yesterday’s answer: It didn’t have the “Praxis effect”

Today’s question: Who’s the only character Maz Kanata looks at without wearing her goggles?