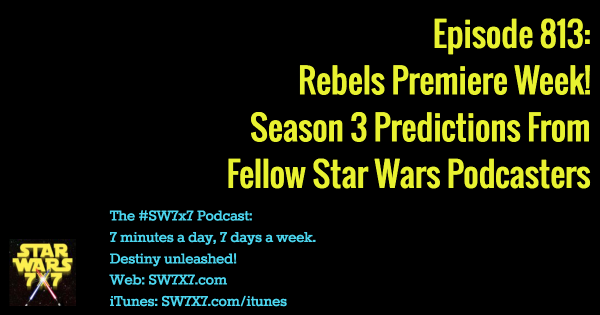 Tonight’s the big night! Star Wars Rebels Season 3 debuts today, and in our penultimate Rebels Premiere Week episode, I’ve got predictions for the season from fellow podcasters Tim McMahon of Less Than 12 Parsecs; Jeremiah Stewart of Bombad Radio; and Dennis Keithly of Starships, Sabers, and Scoundrels.

I’ll also be sharing my own Rebels Season 3 predictions about Ezra, Kanan, Sabine, and Thrawn, and what I think Thrawn’s presence will mean for the burgeoning rebellion. I’d love to know YOUR predictions, too. Share them in the comments!

Yesterday’s answer: In the Finalizer landing bay, from where Poe and Finn escape

Today’s question: What’s the name of the big laser cannon the First Order troopers set up to shoot down their escaping TIE?