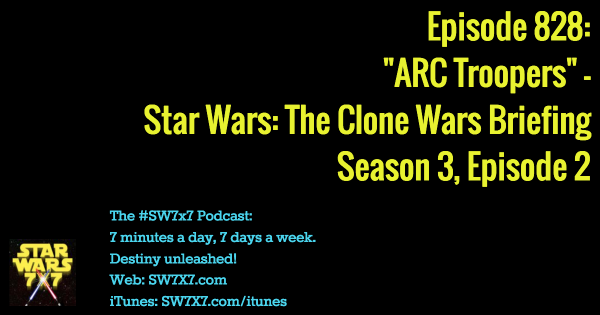 Welcome to my latest Clone Wars Briefing! This time I’m looking at “ARC Troopers,” season 3, episode 2 of the Clone Wars TV series. (Full episode rundown at Wookieepedia, from where the episode image comes from as well. Interesting note about that image – according to the Wookieepedia entry for the episode, that imagery was censored from the original broadcast of the show and was not shown as part of the footage of the episode when it debuted at Celebration V. However, it was added back in for the home release. It’s the first time anything from the Clone Wars was censored by the network!)

The previous episode, “Clone Cadets,” was a prequel of sorts to the season 1 episode, “Rookies.” This one, “ARC Troopers,” is a sequel to “Rookies” and to “Clone Cadets” as well. In it, the Separatists get the brilliant idea of attacking Kamino. In’m not being sarcastic about that – it IS a brilliant idea, because the Republic only has one source for getting clones into the war. If the Separatists can knock it out, the war would go downhill quickly for the Republic from there.

The clones are eager to defend Kamino, which they see as their home – and of course they do! That is where they were all “born,” after all. They of course repel the attack, but the attack was also a bit of misdirection on General Grevious’ part. It’s to distract everyone while Asajj Ventress gets into the Kaminoan labs to steal the clone trooper DNA.

Anakin foils that plot, and Obi-Wan manages to make Grievous think he killed Obi-Wan again, but nope! Saved by an aiwha (those flying air-whale creatures). So all’s well that ends well. Except our old friend 99 gets killed in the action while trying to support Fives and Echo in fighting off the droids, very sad.

Fives and Echo are recognized for their bravery by Rex and Cody, and are officially promoted to ARC Trooper status. (If, like me, you had to look that up, “ARC” = Advanced Recon Commandos.)

What did you think about this: What was more worth censoring, the kiss n’ kill by Ventress, or the pitiful death after the short and happy life of 99? Share your thoughts in the comments!

Yesterday’s answer: By scratching marks onto a metal wall inside her AT-AT home

Today’s question: Why is it hard for Rey to turn on the shields of the Falcon while she’s flying it?