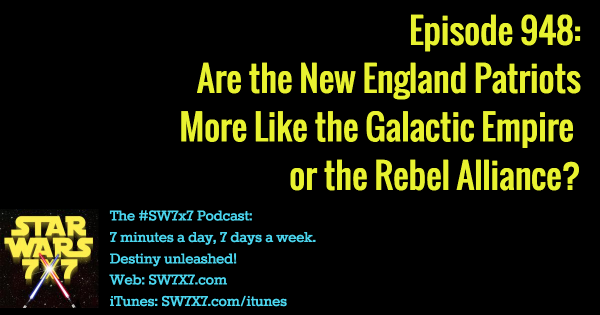 Well, the “Big Game” was on last night (and since we’re not a sports podcast, we can’t say “Uper-say Owl-bay” without risking the attention of some ridiculously aggressive copyright lawyers – isn’t it nice that Lucasfillm is so much more accommodating?), and because I’m looking at things through a Star Wars filter from time to time, I got to wondering whether the champion New England Patriots were more akin to the Galactic Empire or the Rebel Alliance.

In today’s podcast, I’ve got a few examples that could be used to support the argument either way. And I’d like to know where you stand on the subject – share your pick for Empire or Rebel and explain why in the comments!

Today’s question: What’s the name of the first mate on the Crimson Corsair’s ship?