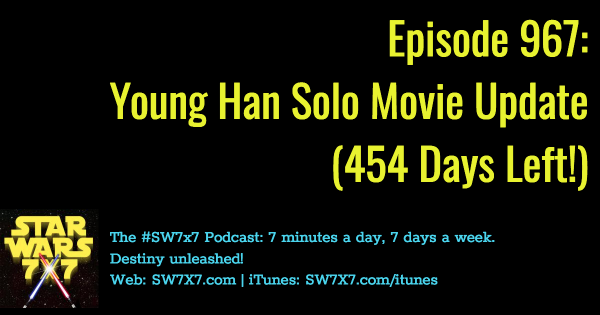 Ladies and gentleman, your cast for the as-yet-untitled Han Solo movie, and filming is underway as of February 20. What’s that, you say? You’re thinking about this tweet from co-director Chris Miller from January 30?

Well, The Last Jedi started principal photography on February 15, 2016, but they shot for a couple of days on Skellig Michael in the fall of 2015, too. I guess this is the formality!

But the announcement of shooting beginning was the tip of the iceberg. For starters, Peter Mayhew won’t be portraying Chewbacca in the movie. That honor goes to Joonas Suotamo, who did Chewie’s more action-oriented work in The Force Awakens. Joonas had this classy bit to say about following in some BIG footsteps:

I'm ecstatic. It's official. And here is my statement to this terrific piece of news https://t.co/a1DPsNDb2P pic.twitter.com/r4EUZ2r17V

Also, the date is back on! May 25, 2018. Could that mean we might see a teaser attached to The Last Jedi? The mind fairly reels with hope!

Next, there had been rumors in Variety about the casting of Thandie Newton and Phoebe Waller-Bridge, and both turned out to be true. Phoebe W-B is supposedly playing a CGI role, and if you click through that link, you may find out what it’s rumored to be.

Being a woman of color, some have suggested Thandie could be playing Sana Starros, who once claimed she was Han’s wife, but it was really a ruse as part of a con job they were pulling back in the day. Others then immediately suggested that Thandie was too old to be playing his “wife,” real or not, because Hollywood. (She’s 44; he’s 27.) Personally, I don’t think that means a thing, and the possibility of Sana is still on the table.

And for the fun of it, here’s an interview with Billy Dee Williams where (among other things) he talks about his lunch with Donald Glover, his own history with Lando, and more.

What are your thoughts about this slate of announcements? Have your say in the comments!

Last but not last, stay tuned toward the end of the podcast to hear the answer to a question submitted by Star Patron Bobby Gordon (Thanks, Bobby!)