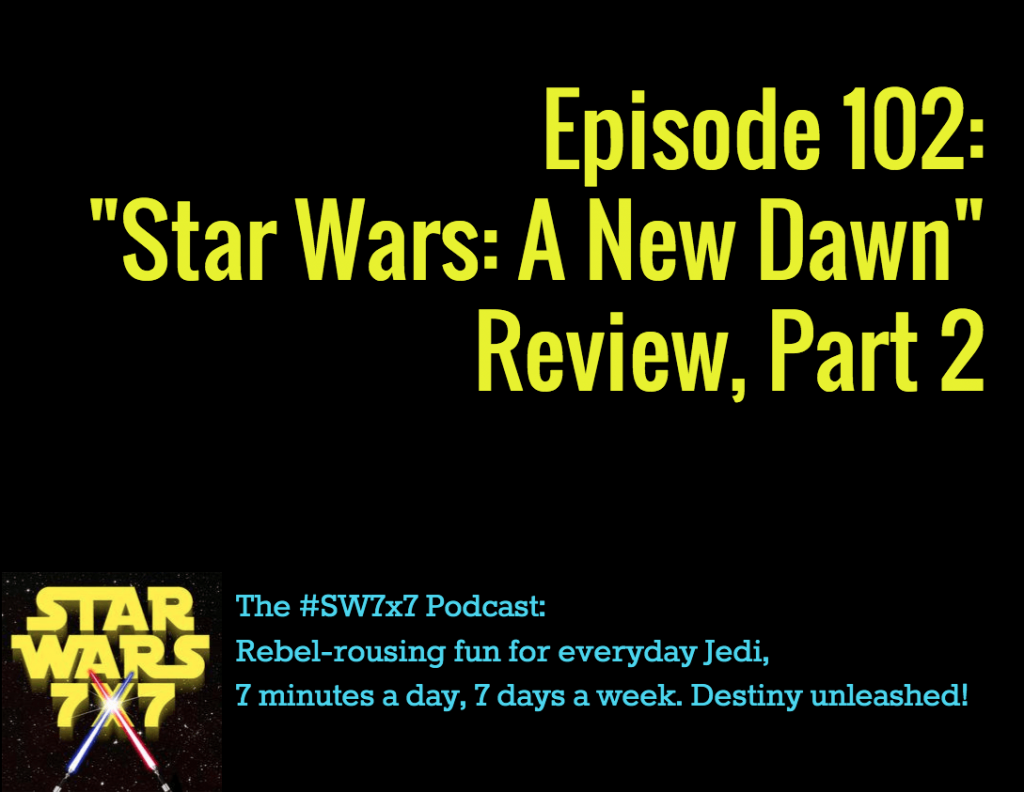 I’d set out to talk about Star Wars: A New Dawn during Episode 99, and I realized that I spent a lot of time talking about my concerns about the throwing out of the Expanded Universe, and the concern that if they’ve done it once, they can do it again, and undo our investment in the Universe and the stories that get told. And I also talked about what didn’t work for me so much, but I don’t think I really gave very much time to what actually did work for me.

Thus, this is the second half of my review of Star Wars: A New Dawn by John Jackson Miller. Now, the book came out a month before Star Wars Rebels debuted, a point which I’m sure was not lost on the newly formed Lucasfilm story group. The novel’s main purpose is not just to introduce us to Kanan Jarrus and Hera Syndulla, but to introduce them to each other. After all, the novel takes place six years before Star Wars Rebels, and from the previews and the first couple of episodes of Rebels, it’s clear that Kanan and Hera have a deep relationship. 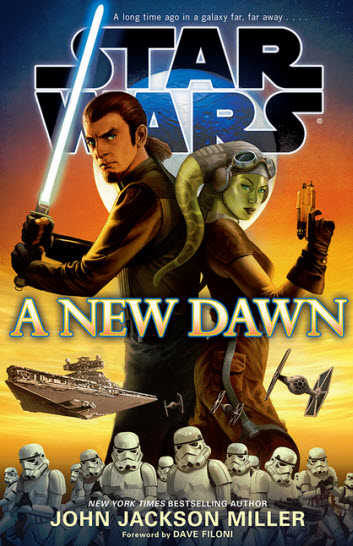 Now, as I’ve said before, I’m not up on a lot of the old EU, but what I remember of the beginnings of it were such that it reminded me of the movies themselves. Which meant a lot of planet-hopping to follow the action across a wide expanse of galaxy. That didn’t happen in A New Dawn, which is why I’d said the story felt “small.”

That being said, Miller does a tremendous job of showing the bigger picture of the galaxy, even while the action centers almost entirely around the planet Gorse and its moon Cynda. Through the eyes of multiple characters, we get a very clear picture of the fledgling Empire, eight years after Revenge of the Sith. Imperial forces kidnap and kill people at will (and I’m using “people” to describe all organic beings, human or alien). Stormtroopers are feared and avoided whenever possible. Emperor Palpatine – who doesn’t appear in the novel, but whose presence is certainly felt – has an inner circle of VIPs vying for influence and attention, undermining and backstabbing each other to get ahead. And the war machine demands an incredible level of resources, which results in the incredible demands being made on the characters in the novel, bringing them all into surreptitious, and then outright conflict.

This is where we find Kanan Jarrus, a survivor of Order 66, who’s changed his name and done his best to stifle any inkling of Jedi ability. He’s cultivated a look-out-for-yourself, stick-your-neck-out-for-no-one attitude, yet in line with his better nature, he can’t seem to stop helping the people around him. And just when he’s about to move on from Gorse and Cynda, before his co-workers remember him too well, she shows up.

Hera Syndulla, that is, a Twi’lek with whom Kanan falls in love with from the moment he lays eyes on her. Hera’s come to Gorse on a secret mission, and though she plays it close to the vest, she drops a hint or two about her feelings about the Empire.

Meanwhile, a well-intentioned-yet-aggravating character – aggravating to the other characters in the novel that is – turns whistleblower on the Cynda mining operation, then takes it too far and becomes a wanted criminal. As Kanan gets sucked into his drama, he finds himself partnering up with Hera, as her mission turns out to involve the same target – Count Vidian, the big baddie of the book.

Vidian is a different kind of cyborg, a brutal efficiency-focused tyrant who’s famous for his business acumen, and now has license to impose his will on star systems thanks to his alliance with the Emperor, and the Star Destroyer muscle he’s been provided with to back it up. And as you’ll find out, he turns out to be a very, VERY difficult opponent.

This is a terrific backdrop upon which to sketch the start of Kanan and Hera getting to know each other – for Kanan to start to find his way back into the galaxy, and stop running from who he really is; and for Hera to learn to trust someone other than herself, and start advancing the cause for which she’s been quietly fighting.

So kudos to Miller for a great first novel in the new canon. It was a pleasure to see Kanan and Hera start to evolve together, and I’m looking forward to seeing how their relationship develops in those six years before Star Wars Rebels.

Did you know? Qui-Gon and Obi-Wan weren’t the only Jedi on Tatooine in The Phantom Menace. Quinlan Vos can be seen in a split-second shot, eating at the outdoor cafe where Jar Jar launched the frog thing that landed in Sebulba’s soup. Who’s Quinlan Vos, you ask? According to the StarWars.com Databank, “A Jedi with a sarcastic sense of humor and a reputation for not playing by the rules, Quinlan Vos was an expert tracker renowned for his ability to read memories from objects people handled.” He appears in The Clone Wars cartoon series, too.

Lightsaber Earrings in blue, green, or red – click the pic for details!