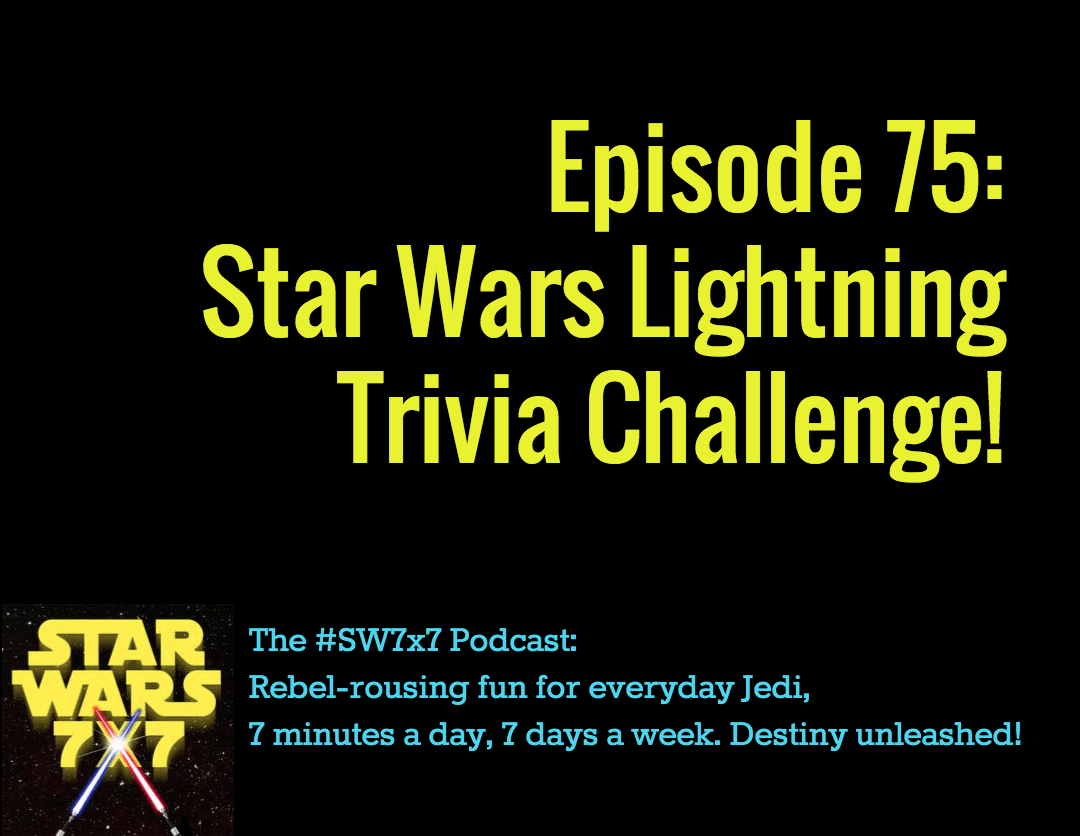 For the podcast audio, the rules are simple. I let Joey read the whole question before I answer, so you have a fair shot to guess while listening at home. (Or in the car, or at the gym, or on the Kessel Run, or wherever.) And I try to answer as many questions as I can in five minutes.

Here are the 39 questions we got through – listen to the podcast for the answers, and to compare your results with mine!

1. Who said he’d watched Luke for a long time?

2. What did Luke try, and fail, to lift from the murky swamp?

3. Who first suggested turning Luke to the dark side of the Force?

4. What planet was Luke trying to land on when his X-wing’s scopes went dead?

5. What did the Dagobah swamp creature swallow, and then spit out?

6. What personality flaw did Obi-Wan admit he shared with Luke, when talking to Yoda?

7. What was Han weaving the Falcon through when he said, “They’d be crazy to follow us”?

8. What defensive system on the Falcon did Han steal from an Imperial maintenance facility?

9. What failed to function on the Falcon just after Han boasted, “Oh yeah? Watch this!”

10. What three-number course did the Falcon set when heading into the asteroid field?

11. Who provoked Han Solo into snapping, “Shut him up or shut him down”?

12. What spaceships tried to trap the Falcon in a pincer movement during the Hoth evacuation?

13. Who infiltrated Jabba’s palace disguised as a guard?

14. What massive vehicle did the stormtroopers destroy while searching for R2-D2 and C-3PO?

15. How did Luke Skywalker address Jabba the Hutt at the start of his holomessage?

16. What duo never returned from Jabba’s palace, according to C-3PO, in Return of the Jedi?

17. What was C-3PO fitted with before he was allowed to work as Jabba’s translator?

18. Who was enjoying a leisurely smoke when R2-D2 and C-3PO were first brought before him?

19. What character was accused of always thinking with his stomach?

20. What items did Luke intend to use to free his friends from the Ewok net trap?

21. Who warned Chewbacca not to touch the dead animal he’d discovered?

22. Who were Han and Luke searching for when they set off into the Endor forest?

24. What did the Ewoks seize from Han after capturing him?

25. Whose run across an Endor battlefield caused C-3PO to say, “This is no time for heroics”?

26. What weapons did the Ewoks use for their surprise attack on the stormtroopers?

27. Who destroyed the first Imperial scout walker on Endor?

28. Who was the first Rebel to enter the Imperial bunker on Endor?

29. What duo did five troopers try to capture just prior to the Ewok’s surprise attack?

30. How many Imperial scout walkers were destroyed during the ground battle on Endor?

31. Who walked down the aisle for the Star Wars medal ceremony, but didn’t receive a medal?

32. How many X-wing fighters were seen flying away from the exploding Death Star?

33. Who was the first person to receive a medal in the Rebel awards ceremony?

34. What planet’s moon once housed the primary Rebel base?

35. Who offered to donate circuits and gears to facilitate the repair of R2-D2?

36. Who winked at Princess Leia during the Star Wars medal ceremony?

37. Who claimed he couldn’t see a thing out of a stormtrooper helmet?

38. What tool is standard equipment on stormtrooper belts?

39. What galactic government do stormtroopers serve?

Previous Post: 74: Star Wars VII Spoilers: Why Are We Obsessed With Them?
Next Post: 76: Cameo Madness, Where Will It End?