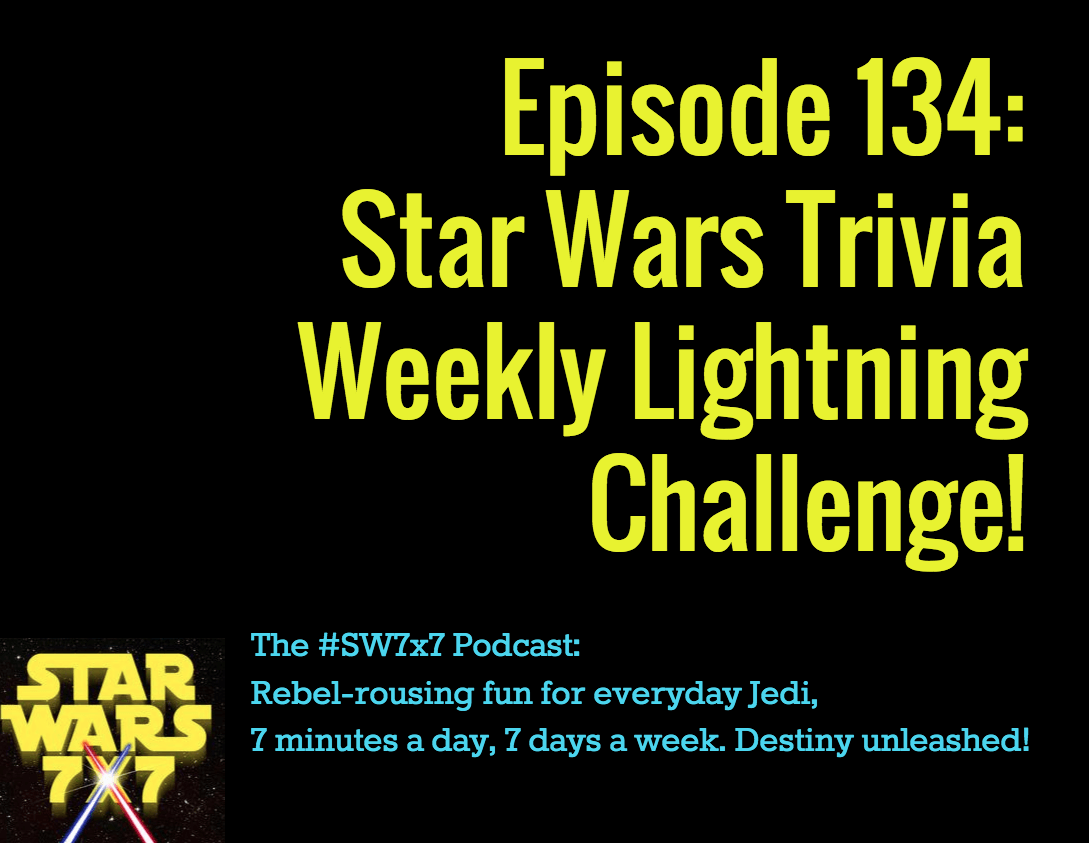 I’m thrilled to say that this week was a MUCH better week for me in the Star Wars Trivia Lightning Challenge, with 30 out of 34 correct (and one or two I wish I had back). How will you fare? Here are the questions asked in the podcast – listen for the answers!

1. Who did Princess Leia address when she barked the order, “Into the garbage chute, flyboy”?

2. Who aimed a blaster rifle at the disguised Princess Leia for threatening Jabba?

3. Who was ordered to bring Princess Leia and Chewbacca to Darth Vader’s ship?

5. What did Princess Leia offer Wicket to put him at ease?

7. Who called the Millennium Falcon a “bucket of bolts”?

8. How many lasers are on each of the Millennium Falcon‘s turrets?

9. Who owned the Millennium Falcon before Han Solo?

10. What was the Millennium Falcon inside when it lost its topside radar dish?

11. How many holomonsters are visible on the Millennium Falcon holoboardgame?

13. Who did Leia hug after the Death Star’s sentry ships were successfully destroyed?

14. What type of ship did Luke use to practice his flying skills back on his homeworld?

15. What duo began the quest to locate Han Solo in carbonite?

16. What planet did Luke Skywalker say he would meet Lando and Chewie on?

17. What did the Rebels’ medical droid fir Luke with?

18. What were the last words spoken in The Empire Strikes Back?

20. Who drove the landspeeder when Luke went looking for R2-D2?

21. What were Ben Kenobi’s first two words in Star Wars?

22. Where on Tatooine was Luke attacked by Sand People?

23. Who lost an arm during a scuffle with Sand People?

25. Who was the first character shown entering the hallway of Jabba’s palace?

27. What planet is home for Jabba’s palace?

28. What did C-3PO do to attract the attention of Jabba’s door scanner?

29. What building’s forbidding appearance caused C-3PO to ask, “Are you sure this is the right place”?

30. Who did Obi-Wan describer as “the best star pilot in the galaxy”?

31. What color is the blade of Obi-Wan’s lightsaber?

33. Where on Tatooine was Obi-Wan’s home located?

34. Whose appearance prompted Obi-Wan to remark, “I don’t seem to remember ever owning a droid”?