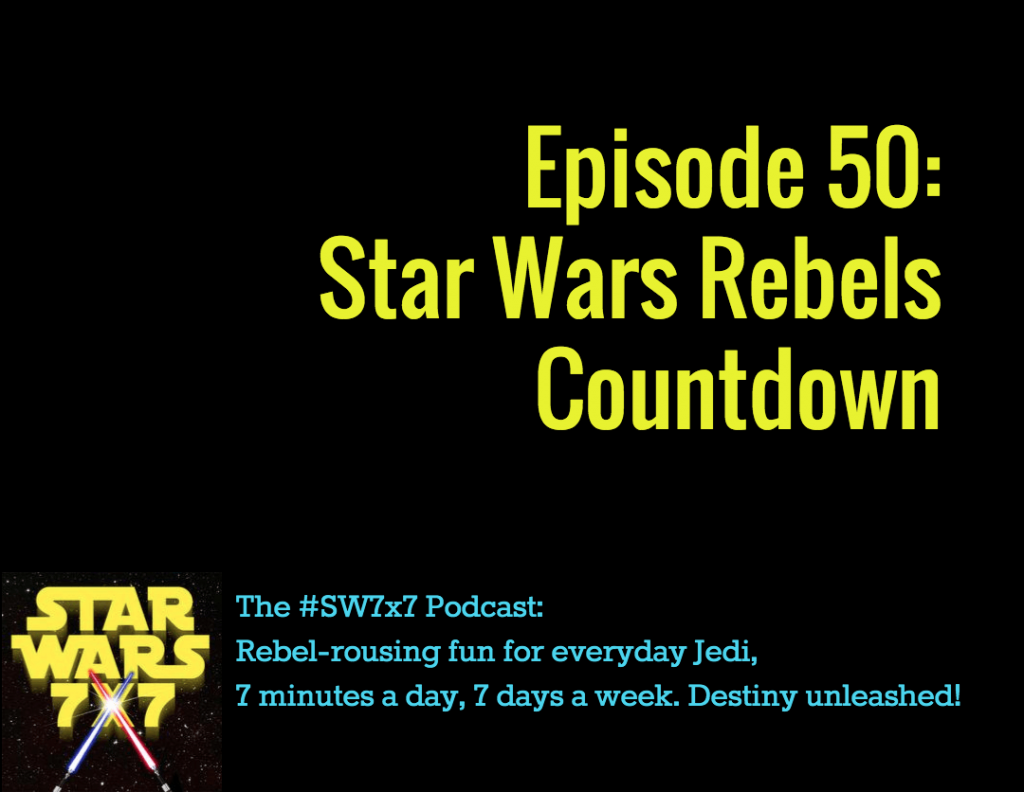 Happy birthday to Ray Park! The man who brought Darth Maul to epic life, and yet had to have his voice dubbed out because it wasn’t menacing enough. Takes a tough man to rock a tender voice!

Today’s question: Who was the first character to fire a laser bolt at Luke in Cloud City?

So the countdown we’re all watching has 481 days remaining – that, of course, is how much longer we have to wait until Episode VII.

But there’s another countdown happening right now, and we’ve only got 42 days left to wait. It’s the countdown to the debut of Star Wars Rebels, the new cartoon from the team behind the Clone Wars cartoons.

In full admission, I still desperately want to watch all the Clone Wars cartoons, and I simply haven’t made the time to go through them on Netflix. My kids have, of course, which makes me immensely jealous. Without giving anything away – how could I, I haven’t watched it all! – I can tell you I’ve heard that the first three seasons were good but not great, and that Seasons 4-6 were very terrific.

Of course, that’s all relative, so whenever you hear someone spout an opinion about Star Wars-related content, it’s worth asking them whether they liked the prequel movies. The Original Trilogy die-hard fans don’t like much of anything else, so even their response to the “Which episodes of the Clone Wars did you like best?” would likely be, “Nope. Didn’t really like at all or watch it very much.” “So, do you like the prequels?” “Oh God, no.” You hear that, and you move on.

But back to Star Wars Rebels, and a few reasons why I’m particularly excited to see the new TV show:

1. It’s canon. I’ve used that term a few times in the podcast, and for those of you not familiar with it, it’s the idea that some stories are “official” and count as part of the storyline of events, characters, and places in this fictional universe. Think of all the books and comics of the past, and of course the beloved 1978 Star Wars Holiday Special – most of the content created in the Star Wars universe got junked as non-canon works, which allows Lucasfilm the ability to re-write the internal history of the Star Wars universe as they see fit. I have a sense that it’s partly J.J. Abrams’ influence as well as Lucas’s. After all, Abrams used a time-travel gambit in his first Star Trek movie in 2009 to create an alternate universe for the rebooted Kirk, Spock, Uhura, et al. Not an option in the Star Wars universe. So, what to do? How about create a whole bunch of new in-demand collectibles in one fell swoop?

Now, the official canon is just the six movies, the Clone Wars cartoons from 2008 and onward, and, wait for it…Star Wars Rebels. So it matters.

2. Returning characters. If there was one casting announcement I deeply desired and didn’t get with Episode VII, it was for Billy Dee Williams to come back. But here’s some incredible news: Lando will be appearing in Star Wars Rebels! And he’ll be voiced by Billy Dee himself. No official “audio double” like with James Arnold Taylor subbing in for Ewan McGregor. Incidentally, James is fantastic as Obi-Wan, and yet, I can’t imagine anyone else doing Lando at any age except for Billy Dee.

Plus, executive producer Simon Kinberg has said what a thrill it is to be writing for Original Trilogy “characters.” Plural. And I don’t think you can count Obi-Wan in this, or R2 and Threepio, because they’re also Prequel Trilogy characters, and nothing new in that sense. Who else do you think we’ll get to see? Have your say on our Facebook page, at Facebook.com/sw7x7.

3. The look and feel. It’s not just that they have the animation style down after all the work on the Clone Wars. It’s the fact that they’re using some of Ralph McQuarrie’s original design sketches as character inspiration. Chopper the astromech droid and Zeb the Lasat enforcer are heavily inspired by R2-D2 and Chewbacca’s concept sketches, respectively.

And it’s the fact that the some of the shots in the short film clip, “The Machine in the Ghost,” are recreations of the Millennium Falcon’s dogfight with TIE Fighters while fleeing first Death Star. There seems to be a very strong desire to connect to the Original Trilogy with this series, and I for one am thrilled about it.