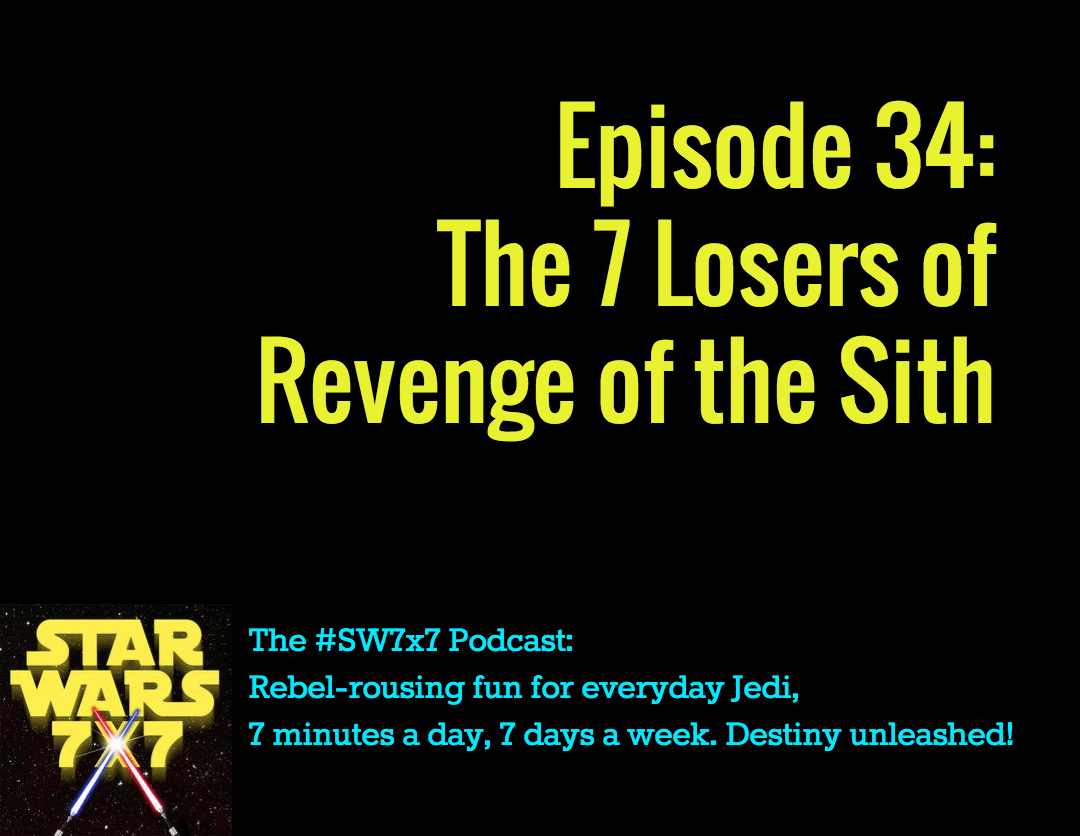 Here’s Graeme Blundell, who played Padme’s dad/Luke and Leia’s grandpa Ruwee Naberrie in Revenge of the Sith. His only spoken lines in the trilogy were actually cut out of Attack of the Clones, but he still managed to get seen in Padme’s funeral scene. Happy birthday, Graeme!

Yesterday’s answer: He disintegrated the droid

Today’s question: What are the odds of surviving a direct frontal assault on an Imperial Star Destroyer? (Trick question!)

Force Feature: The 7 Losers of Revenge of the Sith

Today, we’re talking about the losers in Revenge of the Sith – the folks whose fates and fortunes took a turn for the worse as a result of the events of the movie. There are so many losers in this movie, it’s ridiculous. The one ground rule of this is that the winner had to either appear or be mentioned by name in the movie to qualify.

#7: The Jedi. If there are only two Sith and thousands of Jedi, how do you defeat the Jedi? By getting them to trust an army that’s pre-programmed to kill them.

#6: Mace Windu. “Our ability to use the Force has been diminished,” Mace Windu says. Ya think?! He manages to come this close to taking out Palpatine, and blows it. What if he decides to take Palpatine into custody instead of saying out loud that he has to kill him? Palpatine’s bound to have a Plan B for that, but still, at least you don’t get your forearms cut off and get Force-thrown out a skyscraper window. We never see the body, though…any chance he’s still alive?

#5: Obi-Wan Kenobi. He actually had a shot at preventing this. He was the one sent to Kamino, he was given the opportunity to investigate the clones, so he could have found out about the Order 66 programming. Or could at least have gotten the documentation about it that someone else could have gone over and discovered the trap. Or even could have said, “Hmmmm, if all these clones are based off a bounty hunter, I wonder how trustworthy they can be?” So maybe it’s karma that he’s the one who gets stuck on Tatooine to watch over Luke.

#4: Yoda. Ahhh, Yoda. I’d never want to think of you as a loser, but really, we have to face facts. Sure, you survived the assassination attempt, but you couldn’t prevent any other of the Jedi from being wiped out. And you couldn’t take out Palpatine, either. In fact, I really don’t know why you chose to crawl into that ventilation shaft, anyway! The fight wasn’t over. Why did you give up? Or maybe he knew, like Anakin didn’t, that if you don’t have the high ground, you’re toast?

#3: The Galactic Senate. Congratulations, senators. You helped turn a democracy into a dictatorship, and gave the dictator the army he needed to wipe out all resistance to the cause. What are you going to do now? Be kept on as a farcical support system to rubber stamp an empire of evil. Nice job!

#2: The Separatist Council. Well, you played your part so well in the overthrowing of the Galactic Republic, you should have a seat of honor in the new Empire, shouldn’t you? Ummmm, nope! For all their hard work, Nute Gunray and the rest of the gang get a hot lightsaber as thanks for their support.

#1: Anakin Skywalker. Palpatine works him like a puppet, and Anakin is completely, insanely oblivious. He loses his wife, his best friend, his babies, and the majority of his limbs. He’s set on fire and left to die on a lava planet, only to be rescued and continue a life of pain and misery, sealed up in a crazy experimental spacesuit. If that’s not losing, what is?

So that’s my list of the top 7 losers for Revenge of the Sith! Who else should be on the list? Have your say in the comments!