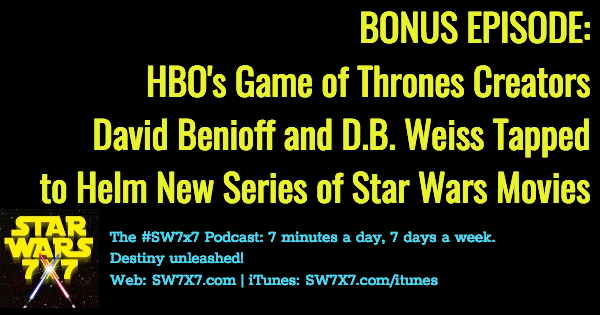 That’s David Benioff, left, and D.B. Weiss, in an image from StarWars.com. And they’re the faces of the future of Star Wars.

in a surprise announcement from Lucasfilm today, Benioff and Weiss – best known as the creators of HBO’s Game of Thrones – have been tapped to helm a new “series” of Star Wars movies. Series is the key word – not a saga, not a trilogy, not something with a defined beginning, middle, and end.

No release date has been set, except that that can’t get to work on it until after the end of Game of Thrones. But that’s enough information for us to project the Star Wars slate of movies all the way into 2026:

2020: Maybe nothing except Indiana Jones 5, if Lucasfilm sticks with producing only one movie a year

2022: The first Benioff and Weiss movie

2023: The second in Rian Johnson’s trilogy

2024: The second Benioff and Weiss movie

2025: The finale of Rian Johnson’s trilogy

2026: The third Benioff and Weiss movie

What are your thoughts about this schedule, and the announcement of Benioff and Weiss getting to create new Star Wars films? Have your say in the comments!