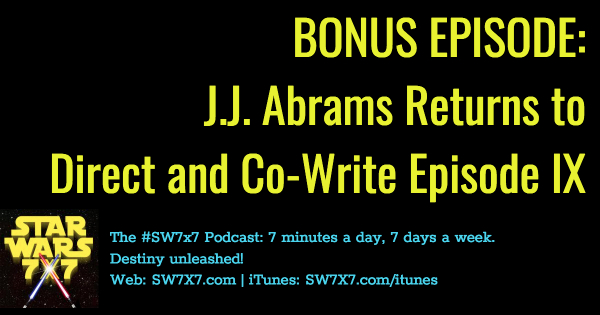 It’s official – J.J. Abrams returns to the Star Wars franchise to finish what he started.

Lucasfilm announced earlier today that The Force Awakens director and co-writer will be coming back to direct and co-write Episode IX in place of Colin Trevorrow, who recently parted ways with LFL over differences in vision with the final chapter of the Sequel Trilogy.

The co-writer joining Abrmas on the job is Chris Terrio, who won an Oscar for Best Adapted Screenplay for Argo in 2012. After that, he dropped off the radar for a few years, until he showed up again in 2016 with a writing credit on Batman v Superman: Dawn of Justice. And he’s involved in the upcoming Justice League movie as well.

I’m covering the news in a bonus episode of the podcast here, and also talking about the missed opportunity to get a female director involved, as well as what this could mean for Star Wars movies in 2020 and beyond.