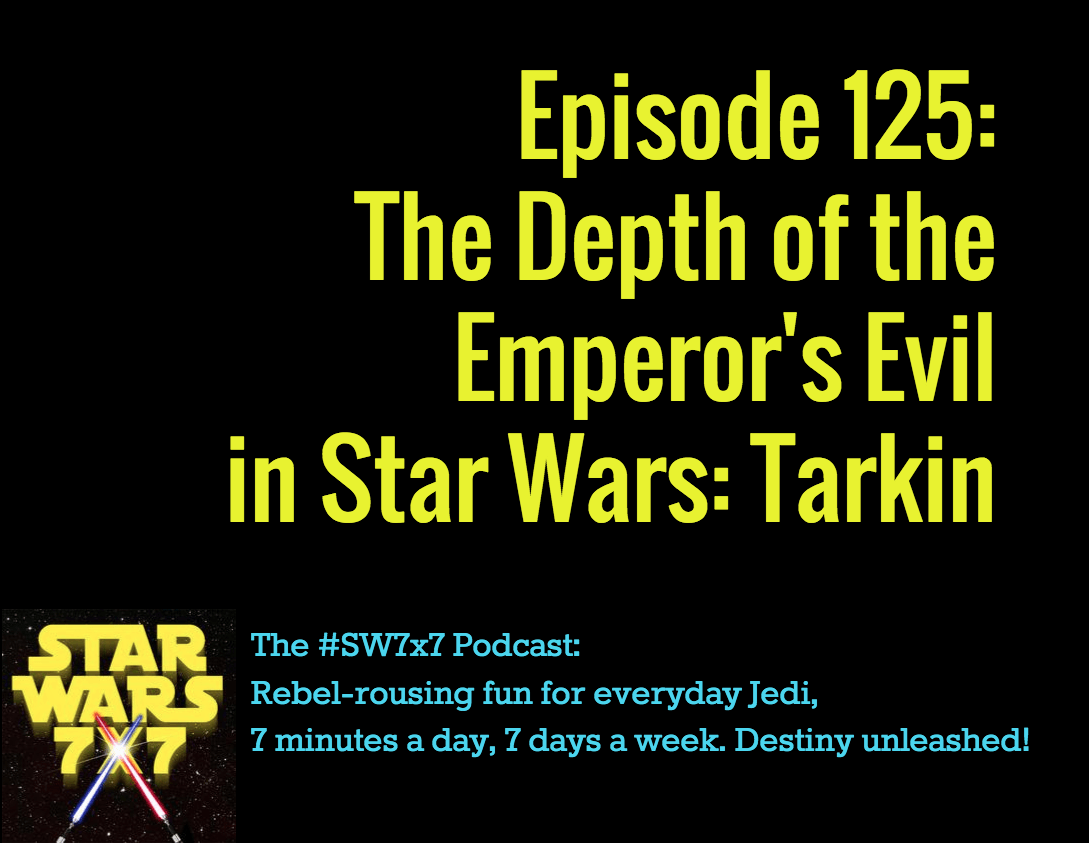 This is Day 4 of #TarkinTime, and though you don’t have to listen to the previous episodes first in order to roll along with this one, I’m just letting you know they’re there for you. Monday was the book review of Star Wars: Tarkin, Tuesday offered a closer look at Tarkin himself, and Wednesday included a look at Darth Vader’s presence in the new novel.

Today, we take a look at the final major character from the Original Trilogy to appear in the novel, and that would be Mr. Sheev Palpatine, already being referred to as “The Emperor” five years out from the events of Revenge of the Sith.

So, let’s compare and contrast a little bit, shall we? In the George Lucas canon, it’s a twenty-three year swing, if I’ve got my math right, from when we last see Palpatine in Revenge of the Sith until we see him again in full in Return of the Jedi. In Jedi, he’s no less evil, but comparatively frail, moving slower and using the cane to walk at times. In Sith, he’s positively perky. In fact, I gotta say, they did a tremendous job with Ian McDiarmid in the movie. When Mace Windu and friends come to arrest him, he’s just frightening with his surprising speed and quick draw with the lightsaber. His battle with Yoda was just as compelling.

We don’t get to see any dramatic action from Palpatine in the novel, but what we do get to see is no less frightening in its own right. First of all, we get to see how Palpatine manipulates the people around him, pitting his underlings against each other and secretly testing the loyalties of even his staunchest supporters. We get a glimpse, thanks to author James Luceno, of how the new Imperial government works under Palpatine. We also get flashbacks to Palpatine’s pre-Imperial career as a senator and as chancellor, and insight into part of how he was working the enormous power play necessary to overthrow the Republic.

I appreciated Palpatine as a villain before this, but the novel definitely added to that and deepened it for me. This is a foe like no other. He’s ridiculously patient, endlessly deceptive, tremendously insightful about the people around him, and capable of controlling so many moving parts in his schemes, it’s practically awe-inspiring.

The craziest thing, though … well, this wouldn’t exactly be a spoiler, since it doesn’t affect any of the plot of the book, but I almost don’t want to tell you about it, because I want to know if you have the same reaction as I did. I can give you a few hints about it, though.

For one thing, we find out in the novel that the Jedi Temple was actually built on top of something else, and when you find out what it is, you’ll have to tell me at Facebook.com/sw7x7 whether you think the Jedi were smart in doing that, or whether they were idiots. Personally, I’m leaning toward idiots. They might as well have built the Temple on a Superfund toxic waste site, for Pete’s sake.

For another, you get to see Palpatine as he’s interacting with the dark side of the Force, which is just darned creepy. And possibly the most important of all – which, when I read it, it was delivered almost as an aside, since it’s not really important to the main plot of the story – was the reasoning, or the goal, if you will, of why The Emperor was building the Death Star in the first place. And yes, it’s to help dominate the galaxy, but even that was just a means to an end for Palpatine. And holy cow, when you read what his ultimate plan was, you’re really gonna say, “Thank goodness the Rebels blew that thing up!”

And that’s the Emperor for you, more malevolent than you ever expect. And man, do we expect a lot. What did you think about him? Chime in at Facebook.com/sw7x7!

Surprising or little known Star Wars tidbits, sometimes related to today’s Force Feature.
Where does the time go? 25 years ago today, science fiction novelist Timothy Zahn received a phone call from his agent, asking him whether he’d be interested in writing Star Wars novels. From such humble beginnings, the Expanded Universe was formed, stoking the flame in the hearts of Star Wars fans worldwide.

Never knew I could have so much fun being an ewok! http://t.co/0EpcH1SXGG pic.twitter.com/fYXE1PLrIP

Today’s question: What did Han toss to the cantina bartender after killing Greedo?