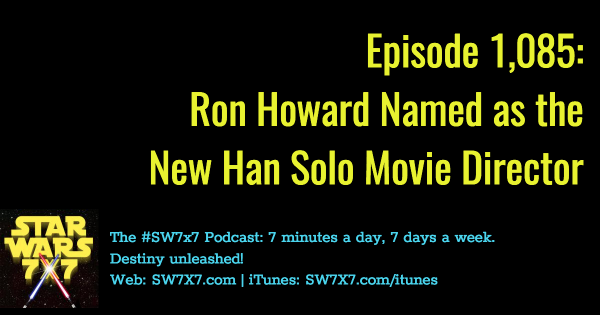 So, it’s official! Ron Howard is the new director of the Han Solo movie. The announcement comes a few days after the news that Phil Lord and Christopher Miller had been removed from the project due to “creative differences.”

While there’s no quote from Howard so far as I’ve seen, here’s what Kathleen Kennedy had to say in the official statement posted on StarWars.com:

At Lucasfilm, we believe the highest goal of each film is to delight, carrying forward the spirit of the saga that George Lucas began forty years ago. With that in mind, we’re thrilled to announce that Ron Howard will step in to direct the untitled Han Solo film. We have a wonderful script, an incredible cast and crew, and the absolute commitment to make a great movie. Filming will resume the 10th of July.

You might be surprised to learn that this is Howard’s second directorial effort in the Star Wars universe, not the first. From a certain point of view, at least. According to no less an authority than Dave Filoni, there’s a connection between the world of Star Wars and the world of Willow, which was directed by Howard from a story by George Lucas.

I’ve got the relevant sound byte in today’s podcast, along with the details of some very, VERY good news. The results of my surgery are in, and for all intents and purposes, I’m cancer free. The hunk of flesh they took out of me showed no signs of cancer cells – “the margins were completely negative,” in the doctor’s lingo – and while this certainly doesn’t mean I get to become complacent, it’s a huge relief.

To everyone who shared their positive thoughts and get well wishes, thank you from the bottom of my heart. It’s been so humbling and uplifting, and I have to say, I’m a very happy Star Wars podcaster today. Thank you for being a crucial part of that experience.

Today’s question: Which way does Cassian go to escape from the dead-end alley on the Ring of Kafrene?