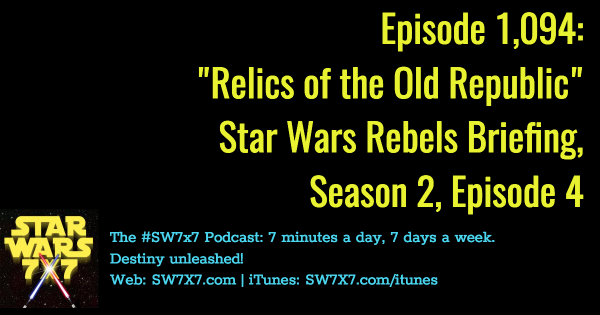 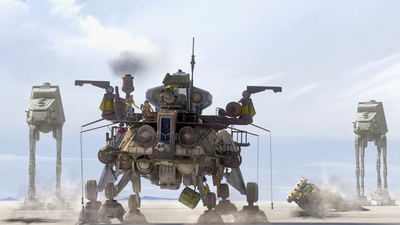 Welcome to the latest Star Wars Rebels Briefing! While we’re waiting for Season 4, I’m going back through the episodes from Season 2. Today, it’s all about episode 4, “Relics of the Old Republic,” the second half of a two-part story arc. (Here’s the full episode rundown on Wookieepedia, from where the image also comes.)

Long story short: the Empire shows up, the Rebels beat them in a fight, and escape to fight another day. 🙂

Slightly longer: Agent Kallus shows up with three AT-ATs to take out the Rebels and the clones, and a lot of Empire Strikes Back memories ensue, complete with new versions of the music from the classic Battle of Hoth scenes. The Rebels and clones on their old AT-TE duck into a sandstorm to try to escape. All sensors are down, but the Jedi don’t need sensors. They take out on walker, and head out of the sandstorm again. The Phantom shuttle is repaired by then, but the clones won’t go with the rebels.

Kanan, not trusting the clones, doesn’t care, but Ezra gets Kanan to think of Ahsoka, so they fly back and assist in taking out the other two walkers. Only Captain Rex will go back with the rebels, and there’s a touching reunion between Ahsoka and Rex back at the fleet.

Up in space, Hera and Chopper played dead until the Star Destroyer Relentless was called away to pick up Vader’s personal shuttle. As Rey might say, “That was lucky!” They booted back up, fixed the hyperdrive, and got out of Dodge.

Meanwhile, the Relentless picked up the shuttle, but Vader wasn’t in it. Instead, it was “The Fifth Brother,” a new villain and a new Inquisitor. And he thinks he’s going to succeed where Kallus and Admiral Konstantine have failed. (He’s wrong, of course, but that will all play out in time.)

And there you have it! How did you like the music cues in this episode? Have your say in the comments!