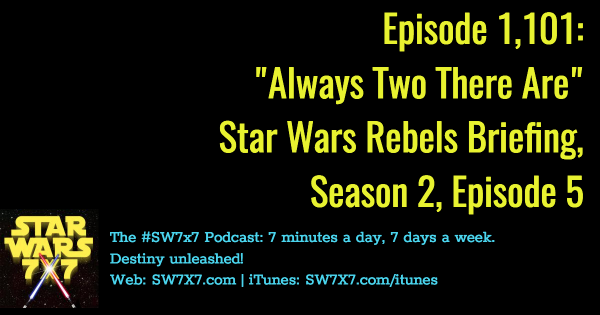 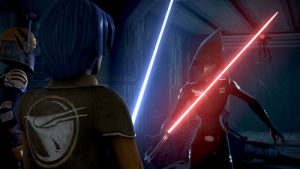 Welcome to the latest Star Wars Rebels Briefing! This time, I’m looking at “Always Two There Are,” episode five from season two of the Star Wars cartoon series. (Here’s the full episode rundown on Wookieepedia, from where the image also comes.)

The “Two” in the title stems from the fact that there are not one, but two Sith Inquisitors now hot on the trail of the Ghost crew. Not only that, but there appears to be some extra motivation happening – since Kanan killed the Grand Inquisitor at the end of Season 1 of Rebels, there’s a power vacuum that the newly introduced Seventh Sister wants to fill herself.

As always, the Rebels get away, but not without having their retreating ship Force-held in a landing bay by the combined powers of the Seventh Sister and the Fifth Brother. And THAT was cool, because I’ve been wondering why all of these powerful Sith don’t just do stuff like that more often. I mean, Vader should be powerful enough to do stuff like this by himself, but in the first episodes of this season, he let the Rebels fly away on a shuttle instead of crashing/crushing it himself. (Granted, the shuttle got shot down by the Empire seconds later, but he couldn’t have foreseen that. Could he have?)

For all the slapsticky stuff in the episode, the final scene is a really downbeat one, with heavily ominous, dirge-like “Imperial March” and Kanan despondent, saying they (the rebels) really have no idea what they’re up against.

What did you think of this episode? Share your thoughts in the comments!

Today’s question: What object do we see a Death Trooper holding that indicates the presence of a child in or around the Erso household?