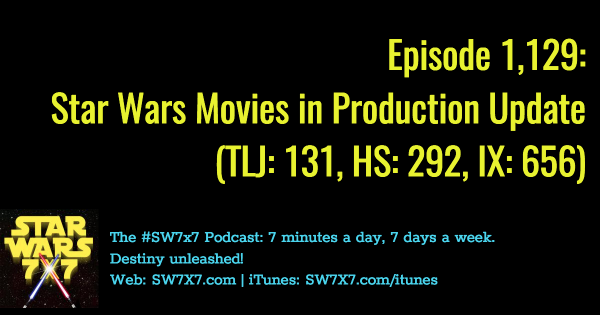 (The numbers in parenthesis in the title card for the show refer to the number of days left until each of the movies in various stages of production get into theaters.)

On today’s episode of the podcast, I’m rounding up the biggest news items of the past week or so, since I’ve been on vacation and it’s time to catch up! I’m back in the New Hampshire studio, getting ready for what the rest of August will bring us from the Star Wars galaxy.

But in the meantime, there’s plenty to talk about, including interviews given by Gwendoline Christie and John Boyega about The Last Jedi; Ron Howard’s posts about droids, food, and shot lists for the Han Solo movie on his social media feeds; and the hiring of a new writer to have a look at the script for Episode IX, Jack Thorne.

Thorne’s bona fides don’t get a fair shake in the Hollywood Reporter exclusive (they just mention British TV shows), so let’s make it clear that he wrote the stage play for Harry Potter and the Cursed Child (from the story by J.K. Rowling and John Tiffany), and wrote a new adaptation of a play called Woyzeck which stars none other than John Boyega in the title role. As good as the British TV shows they mention might be, I think not mentioning a Harry Potter or a Star Wars connection in the story kind of sells the guy short.

Are you familiar with Thorne’s work? Let me know what you think of it in the comments!

Today’s question: In what position are the wings of a U-wing when it lands – pointed forward or swept back?