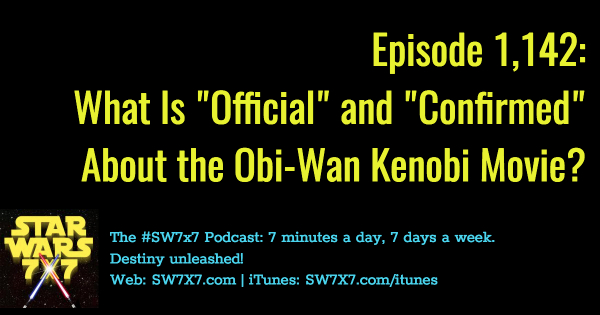 In the wake of the “unnamed sources” rumor report about an Obi-Wan Kenobi movie being in development at Lucasfilm, with Billy Elliot director Stephen Daldry in early stages of negotiation to join the project, a number of news outlets, blogs, et cetera, rushed to judgment.

Here’s the thing: Nothing has been “confirmed.” Nothing is “official” until Lucasfilm and/or Disney say it’s so.

Back in Episode 1,053 in May 2017, I talked about my list of trusted Star Wars news sources on the podcast. One of them was Vanity Fair, but only for a specific reason – because of the cover stories they tend to do on the saga films. (And wouldn’t you know it, their cover story on The Last Jedi debuted within two days of me saying that on the podcast.)

That brought to mind for me the fact that I had said I liked Collider for the interviews that they score with Star Wars peeps – but not necessarily for their reporting. For i09, I talked about Katharine Trendacosta’s articles about the new Star Wars novels, and the things from the old EU (now “Legends”) that are making their way back into the new canon. But again, nothing about their reporting. And as for Mashable, I flagged the awesomeness of Chris Taylor, their senior editor and the author of How Star Wars Conquered the Universe. But stopped there.

With the reporting on the Obi-Wan movie, I was reminded exactly why I drew the lines I drew for Collider, i09, and Mashable. Which I’m explaining in today’s episode!