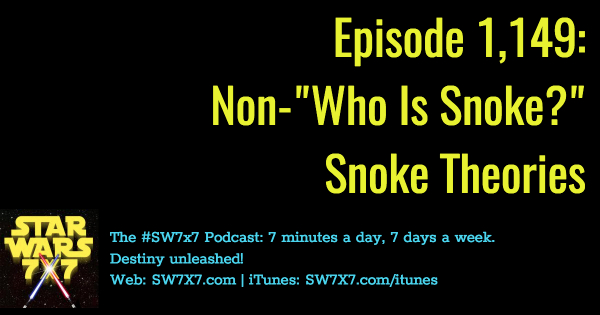 I don’t think I talk much about Snoke on the podcast, but Snoke’s gotten a lot of airplay this week.

And I’ve been hinting during the back half of the week at how the new vehicle reveals from The Last Jedi have suggested something unusual about Snoke and his origin story. Well, today’s the day where I get to dive into it!

Here’s the start of it: The First Order was developing in the shadowy corners of the galaxy, and wasn’t known by the good guys until less than six years before The Force Awakens (no sooner than 28 ABY). Meanwhile, Palpatine had sensed a malevolent presence out in the Unknown Regions before his own death in 4 ABY – likely Snoke.

If Snoke was so powerful that he could be sensed by Palpatine across the galaxy and into the Unknown Regions, why didn’t Snoke have his own army already? Or his own Empire?

That’s the jumping-off point for a couple of theories about why/how Snoke became the Supreme Leader of the First Order, and I’d love to hear yours, too!