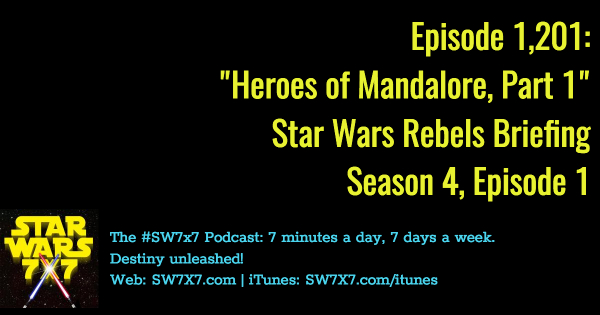 “Heroes of Mandalore Part 1” is the season-opening episode of Star Wars Rebels season 4, and it’s also the episode that was premiered for attendees of the Rebels panel at Star Wars Celebration Orlando in April. (Just Part 1. Part 2 wasn’t shown until last night on Disney XD. Here’s the full episode rundown on Wookieepedia for you!)

Having seen the opening episode at SWCO just over six months ago, I’ve been super-excited for you to be able to finally see it. Because it appears from Part 1 that the Rebels creative team is in a take-no-prisoners mindset about this final season of Rebels. Considering who dies in the first half of this two-part premiere, I have the feeling that no character is safe, with the exception of Hera and Chopper because of their Rogue One insertions.

On today’s podcast, I’m recapping part one and putting in context with an interview Dave Filoni just did with Nerdist about season 4 and what answers we might expect to get to the show’s greatest mysteries…

Previous Post: Episode 1,200: Is That All There Is? (for The Last Jedi Promos)
Next Post: BONUS EPISODE: “Solo: A Star Wars Story” Is Your Official Title