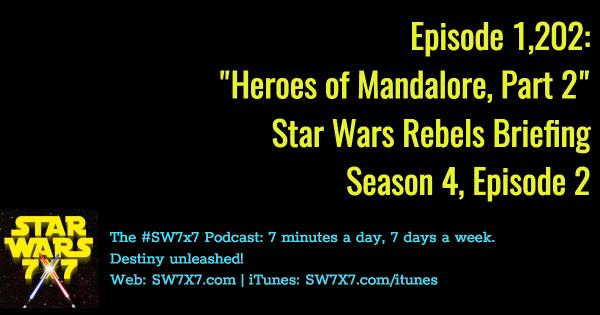 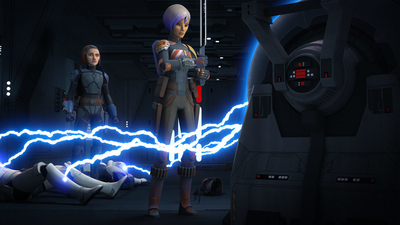 Well, about that “take no prisoners” attitude I thought the creatives behind Star Wars Rebels were coming at Season 4 with?

So far, actually, not so much.

They fooled us after the first half of “Heroes of Mandalore,” letting us think that Sabine’s mother and brother were dead. At the start of Part 2, we find out they were outside of the blast range of the weapon Sabine was responsible for creating. (Here’s the full rundown of Parts 1 and 2 on Wookieepedia, from where the image also hails.)

So, the point/counterpoint: The Ghost crew and the free Mandalorians have to destroy the Arc Pulse Generator, and Grand Admiral Thrawn makes a holographic appearance to tell bad guy Tiber Saxon to capture Sabine and get her to make the weapon as powerful as she had originally built it.

The good guys cook up a plan that, in its absurdity, rivals only Luke Skywalker’s plan to rescue Han from Jabba in Return of the Jedi. The weapon is supposed to be “well-guarded,” so what made them think they could jet-pack their way onto a Star Destroyer undetected?

Of course they can’t. Sabine and Bo-Katan get captured, but the switch that supposedly couldn’t be done gets done – Sabine is able to alter the weapon so that it keys in on stormtrooper armor and not Mandalorian armor. She leaves Tiber Saxon alive but destroys the core of the weapon, which will make it self-destruct and kill Saxon anyway. It’s the classic “I won’t kill you, but I don’t have to save you” gambit.

The Star Destroyer blows up, the Mandalorian clans unite behind Bo-Katan, and Sabine turns the Darksaber over to Bo-Katan as a final symbol of leadership.

A bummer that the Rebels team wouldn’t commit to the loss of Sabine’s mother and sister – not because I’m a guy who likes things dark (I don’t, generally) – more that it lowers the stakes of the show and the season that lies ahead. If you know everyone’s going to be safe, then it’s a bit less compelling that way. But they managed to keep the excitement up nonetheless.

And, on a related note: For me, the odds of Kanan dying by the end of the series just went down significantly for me. He’s going to have to reject the way of the Jedi by season’s end, so he can live and Lucasfilm won’t violate Yoda’s line about Luke being the last of the Jedi after Yoda’s passing from Return of the Jedi. Considering that Ahsoka Tano is no longer a Jedi, maybe Kanan and Ezra will run off with her and create their own band of non-Jedi warriors…