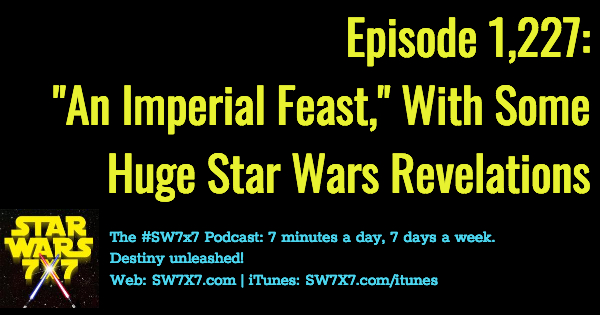 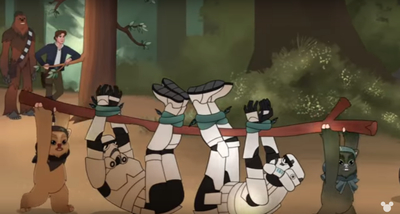 Hands down, without a doubt, this is the best episode of Forces of Destiny yet. In less than three minutes, here’s what they manage to do:

1. Reveal that Hera and Chopper not only survived the Battle of Scarif in Rogue One, they’ve also survived the events of the Original Trilogy.

2. Reveal that Leia was also promoted to the rank of general in the Republic army.

3. Hint strongly at the possibility that this wasn’t the first time Hera and Han have met each other.

4. Confirm the bloodthirsty reputation of the Ewoks as eaters of stormtroopers.

5. Play up the Ewok’s bloodthirsty reputation for comedic purposes.

Not only that, but the slapstick in this episode is better than anything they’ve done so far:

–An Ewok whacks a trussed-up stormtrooper on the head with a wooden spoon (why I called it a ladle in the podcast, I’m not sure)

–Han slaps a ration bar out of Chewie’s hand

And the interaction, too:

[Han and Chewie watching the Ewoks prepping the stormtroopers for dinner]

HAN: You think we should we let ’em?

Chewie laughs, and Leia arrives behind them.

LEIA: Should let them what?

HAN: Uhhh, Leia! We were just–

HAN: [defensive] We just got here.

LEIA: And we you going to stop them?

Leia squints at him.

I’m ranking the 16 Forces of Destiny episodes so far in today’s podcast, fully aware that I’m not the target audience for them, and “An Imperial Feast” is a hands-down #1 for my money. Which one is your favorite?