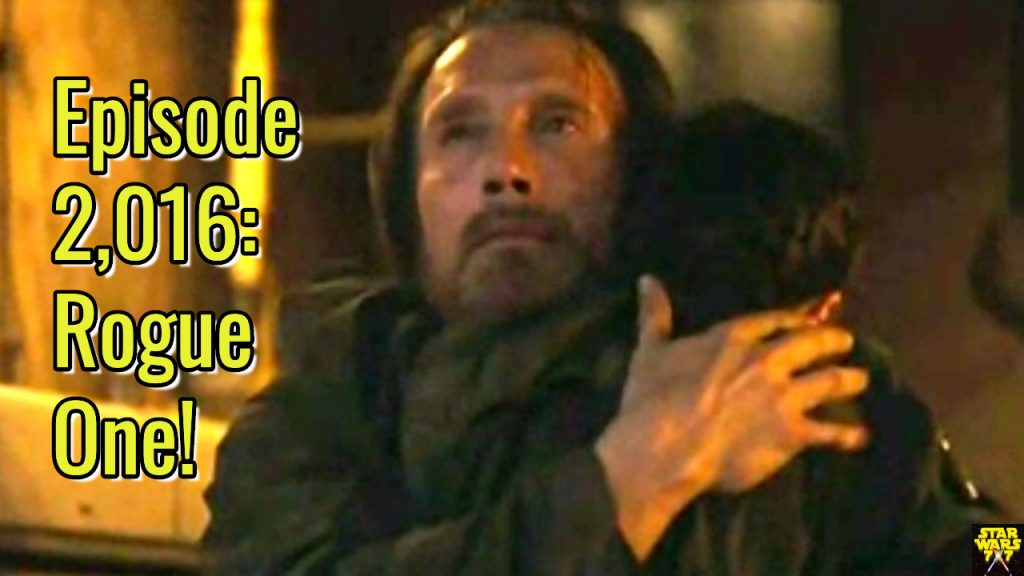 2016 is the year of Rogue One‘s release, so we’re going to talk about that movie here on episode number 2,016 as well! As with our previous year/episode number matchups, family is the topic of the show, and in the case of Rogue One, family is a key driver of the action. Sure, you can make the case that family is important in most, if not all, of the Star Wars movies. But in this case, the father/daughter relationship between Galen and Jyn Erso is at the heart of the movie.

I noticed some parallels and follow-ups looking at the movie through this lens that I hadn’t before. For example, Krennic calls Galen a terrible liar in the opening. Later, in Galen’s hologram message (which Jyn hears in Saw Gerrera’s hideout), Galen reveals that he learned to lie, in order to hide the flaw in the Death Star.

And Jyn telling the Rebel leaders in her initial briefing that it’s easier for her to think of Galen as being dead, juxtaposed with Galen saying in his hologram that he tries to only think of Jyn when he’s “strong enough”? Beautifully connected.

We’ll be talking about this, and how Jyn’s relationship (or connection, or lack thereof at times) drives her journey in the movie on today’s episode. We’ll also touch on the family situations only hinted at for three other characters as well. Punch it!