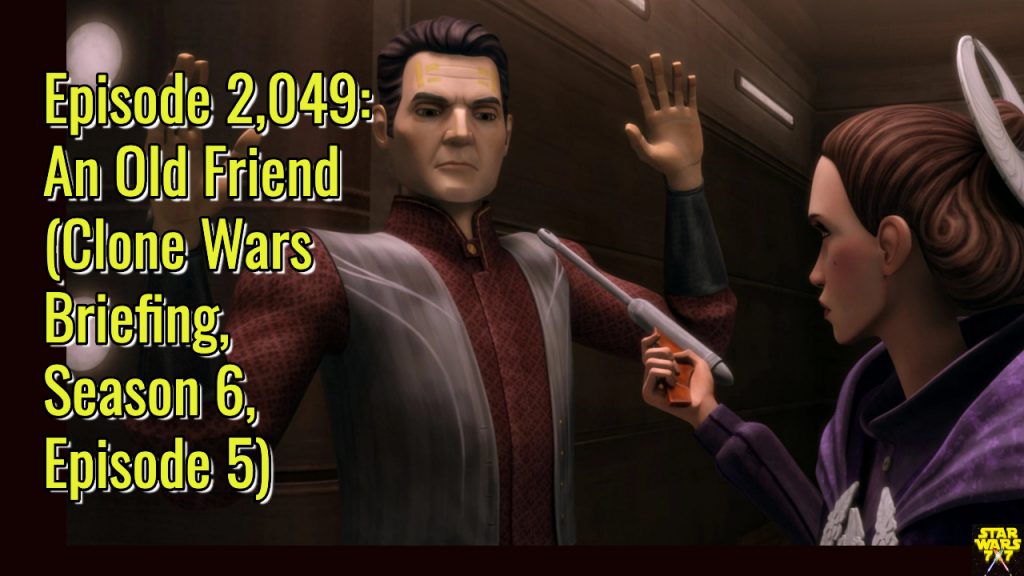 “An Old Friend” is the fifth episode from season six of the Clone Wars, and starts a three-episode story arc that’s cut from the mold of The Phantom Menace in terms of its setup. Here’s the opening narration:

As the war between the Republic and the Separatists intensifies, many are driven from their home planets, and it is up to Senator Amidala to secure aid for them.

All eyes turn to the Banking Clan and the planet Scipio. In an effort to remain independent from the Republic and the Separatists, all operations are divided, and money transactions are performed in a neutral zone surrounding the main vault. For operations to continue, there must be no war on Scipio.

However, worry about the stability of the Banking Clan is brewing within the Republic as the wellspring of money may be in jeopardy….

Taxation of trade routes? Neutral zone banking transactions? Wow! But things get very personal, very fast, when Padme comes face-to-face with the Banking Clan’s top negotiator – Rush Clovis, a known Separatist collaborator, and someone who didn’t do much of anything to try and save her when she’d been poisoned during their last encounter.

To complicate matters, there’s a bounty hunter named Embo on Scipio, and while at first it seems like he’s after Padme, later he appears to be shooting at Clovis. That’s because Clovis claims to know that the Banking Clan is about to be bankrupt, and needs help exposing them.

We’ll talk about all of this in today’s Clone Wars Briefing, and also about story-arc structure in these final episodes. Punch it!