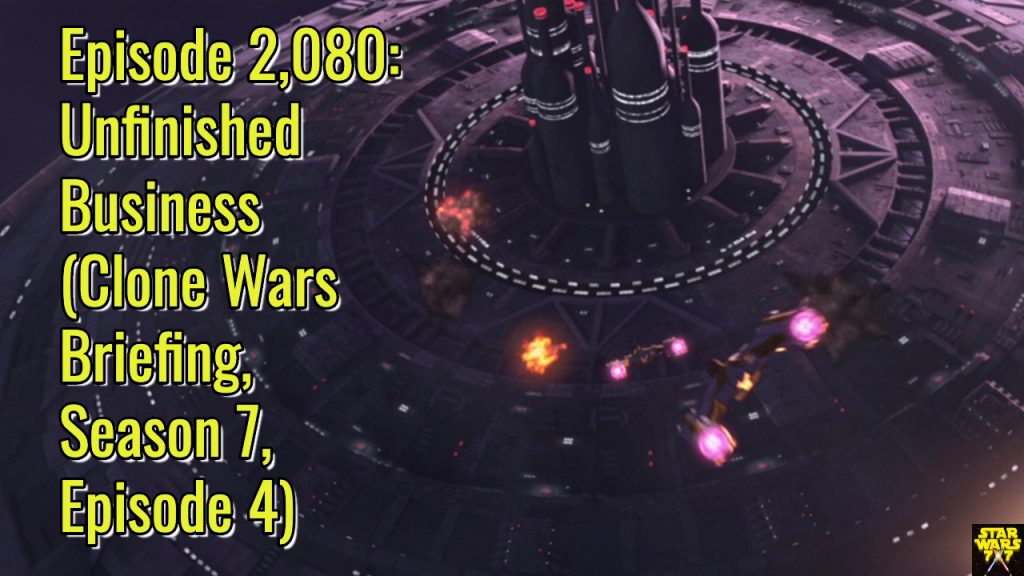 “Unfinished Business” is episode 4 from season 7 of the Clone Wars, and finishes the first story arc of the season in epic fashion.

I mentioned this on the episode, but among the differences between the story reel version and this final version is the opening narration. You can watch the episode to hear the final, and compare it to this, the original:

War rages on! With ARC trooper Echo rescued from the Techno Union, the Republic returns its attention to the battle for Anaxes, where without Echo’s strategic intel, Admiral Trench and the Separatists have lost the upper hand.

But the question remains: can Echo’s newfound ability to access Separatist computers help the Republic regain control of their vital shipyards?

As you’ll see, this original version doesn’t start to cast doubt in where Echo’s loyalties now lie, but the final version for Disney+ sets up that possibility.

On this episode, we’ll talk about how things get wrapped up, and flag other differences between the story reel version and the final version. We’ll also talk about three particular scenes of note in this episode: 1) in which Mace Windu does one of the most Jedi-like things we’ve ever seen him do; 2) in which Anakin, without witnesses, is shown leaning in to his darker impulses; and 3) the epilogue of the episode, which is entirely different from the story reel version and packs an emotional wallop that’s played just right. Punch it!