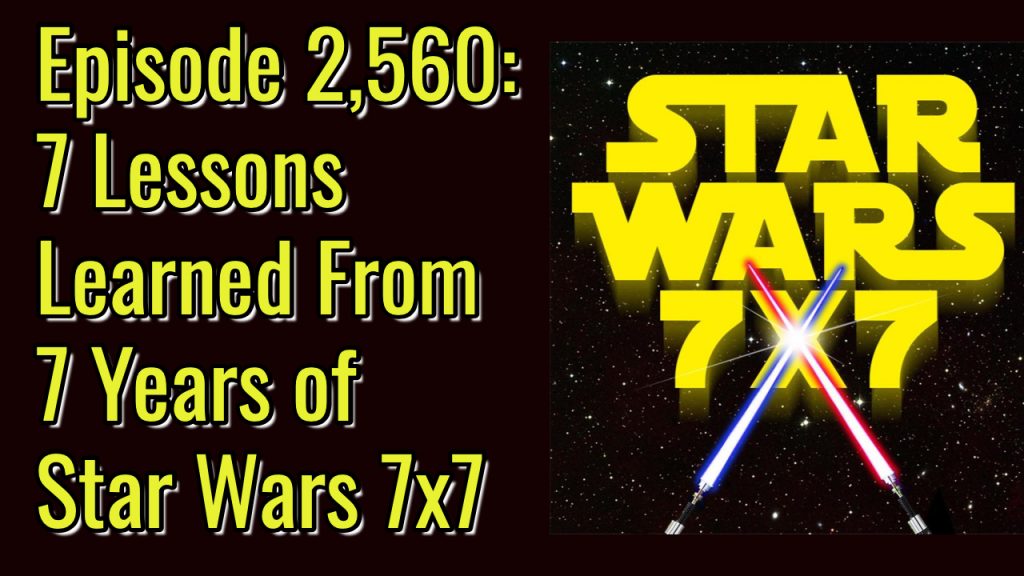 Here are the things I talk about on today’s show:

1. Your opinions are going to change over time. I started out talking about Star Wars as a kind of public trust, and I said that it belongs to the fans now. When I started this podcast, I didn’t ever want to own DVDs of the prequels. I thought that I could never like a Star Wars movie as much as I liked The Empire Strikes Back.

I’ve done a 180-degree around on those topics. I have a much deeper respect for the people who’ve been entrusted with telling Star Wars stories, and my sense of entitlement has been replaced by a sense of gratitude. I’m thrilled that I can watch any of the Prequels at will, and I’ve developed a much greater appreciation for Attack of the Clones over the years. And I’d put Rogue One right up there with The Empire Strikes Back in terms of my favorite Star Wars movies. I’ve even softened up on a couple of Special Edition things. I still have a problem with Han stepping on Jabba’s tail, though.

2. Animation has told some of the best Star Wars stories. Prior to 2008, Star Wars animated storytelling was Ewoks and Droids, and the Clone Wars microseries. And then came The Clone Wars movie in 2008. And in the early, early days of the podcast, I said that the less said about that movie, the better. Well, I’ve softened up on that one, too, but it is still the worst reviewed Star Wars movie by top critics on Rotten Tomatoes.

But that was the reason I didn’t watch the series until after it had concluded its Cartoon Network run AND its Netflix “Lost Missions” run. And I’m glad I finally did. The Mortis arc in season 3, the Umbaran arc of season 4, Ahsoka on the run at the end of season 5, the Clone Conspiracy in season 6, and the Siege of Mandalore in season 7 were all amazing. Rebels had a lot of strong moments, and its final season was just about perfect. And I’ll still stand by my statement that Resistance was hitting its stride in the back half of season 2 before it was discontinued.

3. It isn’t hard to talk about Star Wars every day. In fact, if these past seven years have taught me anything, it’s harder NOT to talk about Star Wars! And thankfully, the pace of Star Wars storytelling and the publication of reference materials has only sped up over the past seven years. In the first year and a half of the show, prior to the release of The Force Awakens, there was a season-plus of Star Wars Rebels, eight novels, and four reference books. Since the release of The Rise of Skywalker, it’s 12 novels, Clone Wars season 7, Mando season 2, The Bad Batch season 1, and a lot more reference books, too, to say nothing of comics or VR or video games with story components.

4. Getting out into the real world is so awesome. I was incredibly nervous at my first Star Wars Celebration in 2015. I’d been doing the podcast for less than a year. I’m not an extrovert by nature, but I managed to work up my courage enough to meet some great people, and even some great people who were listeners to the podcast! At the time I had about 200 listeners per episode, so the odds of that happening were pretty low.

Four years later in Chicago, I was meeting people I’d been engaged with online for the first time, I was having happy reunions with people I’d met at previous Celebrations, and meeting even more fans of the show. I hope to high heaven that trend continues at Celebration 2022 in Anaheim.

5. Star Wars is not divisive. I spent so much time in late 2017 and the first half of 2018 analyzing box office performance and audience polling, and talking to people analyzing social media activity and user rating vote brigading, questioning my assumptions as hard as I could at every turn. And time and again, the only thing I discovered was that it was a small subset of people who managed to make themselves very loud, and a certain tier of web-based entertainment websites that thrived on clickbait headlines and stirring up tension for traffic.

The fact of the matter is, Star Wars is still beloved by the large majority of people who loved it prior to 2014. And of the people who didn’t like any movie made since them, the majority haven’t rejected the rest of Star Wars. They’ve subscribed to the “love and let love” mantra.

I also did episodes on the pandemic in general, on the Black Lives Matter protests and Lucasfilm’s and John Boyega’s responses, on the insurrection, and more. It was actually a bit scary to do those episodes, but the way you and the rest of the listeners of the show responded made it clear that they were the right decisions.

7. We’re about to enter another golden run of Star Wars storytelling. In the next year, we’re going to have Book of Boba Fett, Andor, Kenobi, Mando season 3, and Star Wars Visions. The High Republic will continue. And we’ll undoubtedly learn more about Ahsoka, Lando, the Acolyte, and Rogue Squadron. I remember back in 2012 knowing that Disney was taking over and that they were going to do the Sequel Trilogy and thinking that we were in for a wonderful new ride. And we were!

But man, it’s nothing compared to the volume of live action storytelling we’re about to enjoy. So yes, it’s still a wonderful time to be a Star Wars fan, and over the years, it seems to be getting better all the time.

I’ve got a lot more to share about my plans as I enter into the eighth year of this one-man show, but for now, I just want to say thank you for listening. It’s an honor to be a part of your day, and I hope to keep earning that place in your life. More to come, much more, but for now, thank you so much for joining me, as always, and may the Force be with you, wherever in the world you may be.