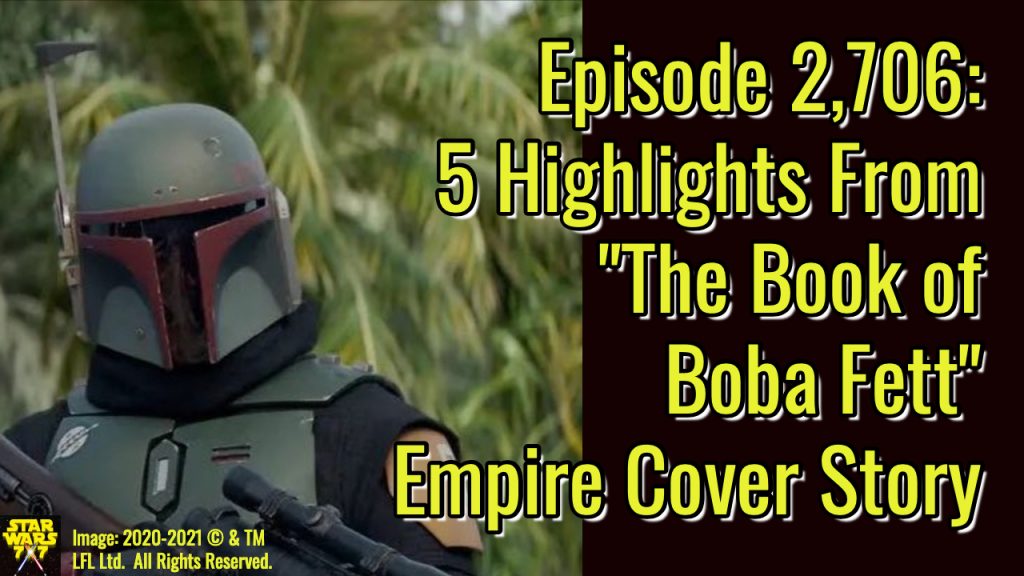 Over the holiday weekend, Empire Magazine dropped their Book of Boba Fett cover story! Today, five highlights from the feature – some of which confirmed or aligned with things about which we’ve speculated here on the podcast over the past couple of months. Punch it!

So last week, the Empire magazine feature story on The Book of Boba Fett came out.

Empire is a magazine that is published in the UK, but you can get digital copies in the US. You can actually and get print copies sent to you. It just takes a bit longer. Anyway, we’re going to talk about five highlights from the big cover story, and a lot of them actually confirm speculation that we’ve been doing here on the podcast over the past few weeks. Punch it!

Hey, Rebel Rouser, I’m Allen Voivod. This is Star Wars 7×7, your daily dose of Star Wars joy. And thank you so much for joining me for it.

So let’s start out with a number of episodes because Lucasfilm actually revealed the number of episodes yesterday on November 29. It’s going to be a seven episode original series. And back when I looked at this in September and looked at the directors that we knew about, so at the time, that was Dave Filoni and Bryce Dallas Howard and Jon Favreau and Richard Rodriguez was going to direct, quote, unquote multiple episodes or several episodes depending on your source.

So at the time, it looked like it was going to be a minimum of six and that it could go longer. In the article that came out in Empire Online, they named a couple of new directors, ones that hadn’t been previously announced.

One of them is Steph Green, and she is an Oscar and Emmy nominated director. She’s done a lot of one-off episodes for different series like Watchman and Luke Cage and also a couple for The Americans. And there’s a Star Wars connection there because Steven Schiff, who was the showrunner for The Americans, was the original showrunner for the Andor series. And she also directed an episode of the new L Word series Generation Q, and Jennifer Beals is in that series, and Jennifer Beals is, of course, in The Book of Boba Fett. So there’s another connection right there.

And the other director’s name in the Empire story is Kevin Tancharoen. Hopefully I’m getting that pronunciation right, Kevin. Kevin has directed a number of TV series as well, including episodes of Agents of Shield and an Inhumans episode. He also did some DC stuff for Arrow and Flash and Legends of Tomorrow, and he also directed an episode of Iron Fist too. So yes, he is kind of in the family as it were.

So when the Empire article came out last week, I was really heading toward telling you it seemed like it was going to be eight episodes because we had five directors named plus Robert Rodriguez directing multiple or several episodes. And so that seemed like three at a minimum. So five plus three is eight. Well, turns out we’re at seven instead. So right in the middle.

And so now the only question is whether we’re going to get it across seven weeks or are they going to double up on us for the first week. Don’t know that yet, but they will announce that ahead of time, they won’t make that a surprise situation on December 29.

All right. The second highlight from the article has to do with the power vacuum that exists in the criminal underworld. And by the way, there are a number of articles on Empire’s website that extract pieces of the feature article and break it out into multiple articles online. And so I’ll say you can pretty much get the gist of the whole feature storyby poking through all of those articles, but it’s sort of wrapped up nicely and neatly in one cohesive package in the actual magazine article.

But I’m digressing slightly. So Jon Favreau talks about the power vacuum that exists after Bib Fortuna gets knocked off, and he talks about how Jabba was particularly powerful and without him around, who’s running things, Bib isn’t necessarily strong enough to do that.

And that is reflective of speculation that I was doing a couple of weeks ago when we were talking about all the different criminal syndicates that were or are in operation or will be in operation across the Star Wars canon timeline and the possibilities of certain criminal syndicates showing up in the series. So a lot of that was based on the fact that there was going to be an assumption of a power vacuum, that there were no Hutts running things.

And in fact, that’s the most recent thing that we knew in the canon timeline that other Hutts were kind of picking through Jabba’s remains and trying to figure out who is going to take control of the whole Hutt Clan situation, but that by 5 ABY, it still hadn’t been figured out yet, and it certainly seems like by 9 or 10 ABY, it still isn’t figured out either.

So it was nice to hear something along those lines from Jon Favreau that seemed to bolster the speculation that I’ve been doing over the past couple of weeks, and something else that we were just talking about yesterday, yeah, yesterday, as it turns out, about Boba Fett’s leadership qualities, and the article goes into something related to that as well.

And that seems to dovetail a bit with what we were talking about with the “Bounty” episode in the Clone Wars, and about how Ventriss saw Boba Fett as not being a leader even at that young age, like that just wasn’t who he was. And certainly people have the capacity to grow over time. But as somebody who wasn’t even inquiring as to the welfare of the other bounty hunters on his team, that did not strike Ventriss as a leader-like quality. And so it stands to reason that we might have to see Boba Fett develop some leadership qualities in this series as well.

And so here we have another situation where George Lucas wanted Boba Fett to come back. And there are references in the article to the Star Wars Underworld series that was in the works, that was being planned back in the early to mid 2000s. That just never got off the ground. It was going to be too expensive to produce in live action at the time. But the plan was to have Boba Fett be back and available in that meaning that he survived the Sarlacc.

The 1313 video game was also supposed to feature a young Boba Fett. It wouldn’t necessarily have meant him coming back from the dead, kind of slightly different situation. They mentioned that in the article. But yeah, the Underworld series, he was intended to come back.

And from the beginning of The Mandalorian, they say that they were already thinking about Boba Fett and wondering how or if or whether they could bring him back potentially. And even in Legends, he survives the Sarlacc Pit. They do it pretty much right after the comic book adaptation for Return of the Jedi. So it’s around issue 80-some-odd within the Star Wars Marvel comic series where he gets out of the Sarlacc and he is just messed up.

So now here’s the fourth top takeaway, and we’ll tie it back into the third. Fennec Shand was not supposed to survive the events of Chapter Five of The Mandalorian, the Gunslinger. Apparently the original plan was for her to die in the Tatooine deserts. And it turned out that as they worked with Ming-Na Wen and saw her character in action, they thought, oh, there’s more to this character. We can do more with this character. How do we make sure that she survives the events of the episode and do it in a cool way?

And this is how they decided to work Boba Fett in, they’re like, okay, how could she survive? Well, she could be left for dead and somebody finds her. And who’s that somebody? Well, we’ve been trying to figure out a way to get Boba Fett involved in this whole thing. So here’s how we can seed the whole situation.

Now, the fifth and final takeaway to share has to do with how much of Boba Fett’s past are we going to see. In particular, one question that’s raised in the Empire article is whether we are going to see how Boba Fett survived the Sarlacc Pit, and Kathleen Kennedy is interviewed for the article in a few different places. And she says, I can’t answer that question. Jon would kill me, Jon Favreau, presumably.

And what’s more, we keep getting shots of situations that take place prior to the events of his appearance in The Mandalorian. So, for example, we’ve already talked about seeing him approaching Slave I and still wearing the Tusken robes that he was wearing. So that suggests that that’s him getting to his ship before he takes off to go see The Mandalorian.

And there’s a new commercial spot where they show him, this one doesn’t necessarily have to be part of his recuperation, but he is submerged and has a breathing apparatus in his mouth. And it’s not necessarily like a bacta thing. It could be just like a rejuvenation chamber situation. And there is a sort of tanning bed kind of thing in one of the scenes that we see before a droid hands him his helmet to put back on. So maybe that’s just for that.

But this also kind of opens the door to a big question, which is, are we still going to think Boba Fett is cool after we learn more about him? The answer, hopefully for everyone, and certainly the answer that Lucasfilm wants us to arrive at is yes, that will be the case. The whole allure of Boba Fett over the years has been his mystery. His mystique. The fact that he just seems cool and we don’t really know a lot about him, but yeah, certainly the whole Return of the Jedi thing did not speak well for his abilities or capabilities or anything like that.

But generally speaking, and overall, his mystery has been part of his appeal Certainly the cool factor was definitely reinforced by his appearance in Chapter 14 of The Mandalorian. And so the big challenge for Robert Rodriguez and Jon Favreau and Dave Filoni and company is going to be making sure that they continue to ramp up Boba Fett’s coolness factor, even as we learn more about him. And even as we see him as a newcomer in this whole criminal syndicate situation and knowing that he’s going to fail, he’s going to make mistakes.

But he still has to be cooler than he was even when we knew very little about him. That’s the big challenge. So it’ll be interesting to see how it all works out. And so that’s what I’ve got for you on the highlights from the Boba Fett reveals in Empire magazine’s cover story on The Book of Boba Fett, and that is going to do it for this episode of the show as well.

It just remains for me to say thank you so much for joining me for it as always, and may the Force be with you, wherever in the world you may be.