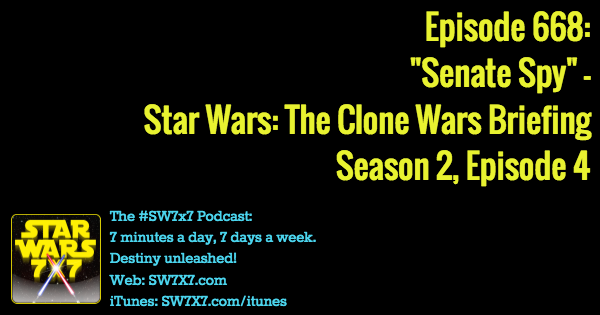 The Clone Wars Briefing is back! We’re up to Season 2, Episode 4 of Star Wars: The Clone Wars, and the episode is called “Senate Spy.”

In brief – Senator Rush Clovis is suspected of being a Separatist spy. The Jedi have asked Padme to spy on him and get the dirt, but she’s refused. Why? Because they used to have a thing together. Anakin is none too pleased to find that out, especially when the Jedi ask him to convince Padme to take on the job.

Anakin, in the midst of his jealousy, actually ends up making Padme decide to take on the job. Clovis is happy to have Padme back in his life, proposing that she join him on a trip to get Lot Dodd of the Trade Federation to pay his bills to the Banking Clan. (Pic via Wookieepedia)

But what he’s really doing is talking to them about a new and bigger droid factory, along with Geonosian leader Poggle the Lesser (from Attack of the Clones). The Banking Clan won’t extend their credit, so Lot Dodd and Poggle decide to poison Padme as a means of blackmailing Clovis. Clovis turns against the Separatists long enough to get the antidote at blaster point, but then Anakin takes Padme and their ship and leaves Clovis behind, to suffer at the hands of the criminals he’d just double-crossed.

This is the first of a five-episode arc, so I have the feeling we haven’t heard the last of Senator Clovis – or of the jealousy bubbling up in Anakin. And I continue to be shocked that the Jedi aren’t picking up on it whatsoever. Obi-Wan thoughtfully scratches his beard at Anakin, but otherwise, no one seems to notice how riled up he gets over anything to do with Padme. A little nutty, right? Does someone ever seem to suspect or put the pieces together in later episodes?!

Check out the full episode description on Wookieepedia, and also check out the details of the BD-3000 “luxury droid.” (Really, George Lucas?)

Yesterday’s answer: “This will begin to make things right.”