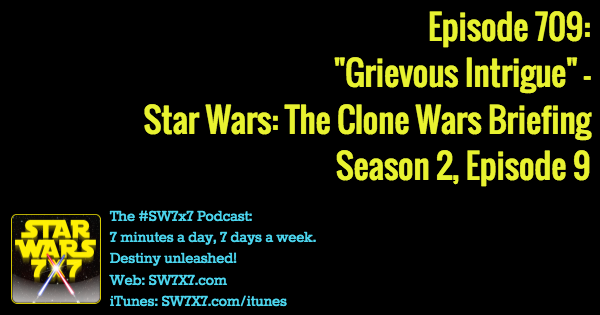 Welcome to another Clone Wars Briefing! This time we’re covering “Grievous Intrigue” – Season 2, Episode 9 of the Clone Wars cartoon series. (Pic via Wookieepedia, where you can also get the full episode rundown.)

In brief: Grievous captures a Jedi and taunts the Jedi Council about it, but the downed Jedi uses hand signals to tell the Jedi where he’s being taken – Saleucami. The Jedi take a bunch of Republic ships there to attack Grievous and stage a diversion for Anakin to jump into the system undetected, board Grievous’s command ship, and save the captured Jedi.

Of course, it’s a trap – Grievous figured they were coming, and had a squad of commando droids waiting for Anakin and Adi Gallia. To no avail, though, as Anakin and Adi destroy the droids and rescue the Jedi.

Meanwhile, Grievous comes aboard Obi-Wan’s ship and they get into a big ol’ fight, during which Grievous boasts of being the leader of the biggest droid army the galaxy has ever seen, and that he doesn’t care about Dooku’s politics – Grievous is only in this thing to fulfill his dream of a galaxy without Jedi.

So, this got me wondering for the first time – what, exactly, is Grievous’ beef with the Jedi? We know he’s proud of killing them, and keeps their lightsabers for trophies, but beyond that, why does he care?

It turns out that this is all “Legends” stuff now, but the flashpoint was the “Huk War,” also known as the “Yam’rii Crisis,” into which you can dive more deeply at Wookieepedia. I’ve got a shorter version of it here for you, though.

The Yam’rii were terrorizing a bunch of neighboring planets, enslaving, plundering, and such. When they hit Kalee, things didn’t go so well. The Kaleesh fought back, under leaders including Qymaen jai Sheelal, who eventually nicknamed himself “Grievous” during the war.

The Kaleesh actually pushed back against the Yam’rii and started attacking some of the other colonized worlds, and the Yam’rii freaked out and asked the Trade Federation to intercede. The Trade Federation lobbied the Galactic Senate for aid, claiming the Kaleesh had started the war, and conned the Republic into sending Jedi to end the war. Harsh sanctions were levied on the Kaleesh, which naturally made the Kaleesh suffer greatly and made Grievous even angrier.

So that’s why, in “Legends” lore, Grievous wants the Jedi dead. It would be terrific to see some of this backstory examined by the Lucasfilm Story Group and re-canonized, in my opinion. What about you? Is there anything in “Legends” that you wish would become canon again? Have your say in the comments!

Yesterday’s answer: On his own command ship

Today’s question: Who was the first to spot the impending arrival of the First Order on Jakku?