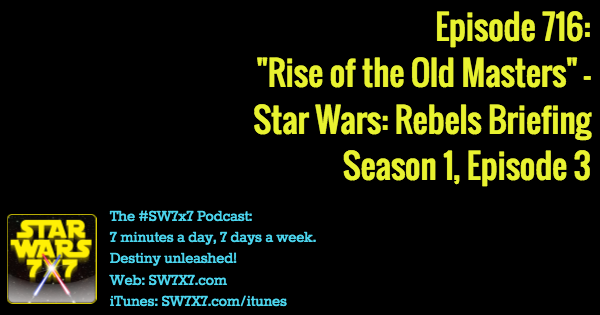 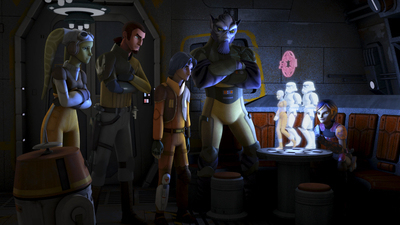 Welcome to another Star Wars Rebels briefing! This time, we’re looking at “Rise of the Old Masters,” which is Episode 3 of Season 1. (Photo via Wookieepedia – here’s the full episode rundown, too.)

This episode is one of the most emotionally resonant of the series so far, and has me bought into the series. It ties Rebels into both the Prequel and Original Trilogy in a very real way – granted, the tie into the Original Trilogy comes with a great take on the classic Yoda bon mot, “Do or do not, there is no try,” since we all know that from Empire, but clearly Kanan Jarrus knows that from the Prequel Trilogy timeframe.

The plot in brief – a message in a hacked holonet transmission claims that Jedi Master Luminara Unduli is alive and being held in an Imperial prison. The Ghost crew goes to rescue her, not just because it’s the right thing to do, but because Kanan thinks Luminara will be a better Jedi teacher to Ezra than he will.

Turns out it’s a trap. The Force ghost of Luminara can’t talk, but walks back into the body the Empire has frozen away, and the Grand Inquisitor shows up. GI is a Sith user who’s analyzed records from the Jedi Temple and can tell by Kanan’s fighting style who trained him. GI also reveals that they’ve been using the body of Luminara to lure Order-66-surviving Jedi out of hiding and to their deaths.

Kanan and company escape the trap, and despite the fact that Ezra calls Kanan undisciplined and unfocused, and the Grand Inquisitor says the same of Kanan, Kanan decides that he’s not just going to try to train Ezra – he WILL train Ezra.

So my question to you is – and it may be an impossible one – which series do you like better, Rebels or Clone Wars? Have your say in the comments!

Today’s question: What’s the name of the leader of the Guavian Death Gang?