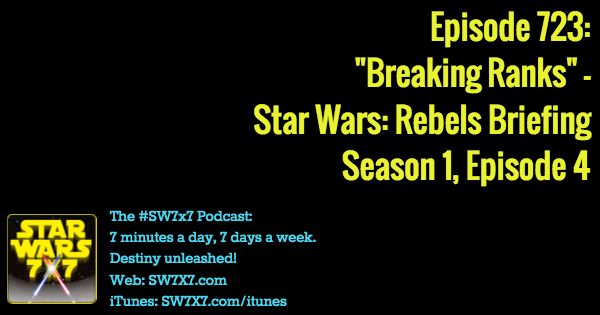 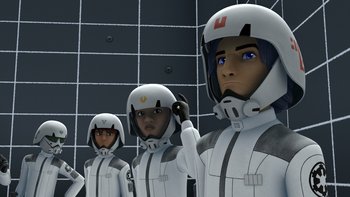 Welcome to the latest Rebels Briefing! Today we’re looking at “Breaking Ranks,” which is Episode 4 of Season 1 of Star Wars Rebels. (Picture via Wookieepedia, as is the full episode breakdown right here.)

In brief – Young Jedi learner Ezra (he’s not exactly a Padawan, per se) is undercover at the Imperial Academy on Lothal, ultimately trying to get a decoder that he can hand off to the Ghost crew. Said decoder will help the crew find the location of a kyber crystal shipment that they hope to destroy before the Empire can use it.

Long story short – Ezra gets it, and they blow up the shipment. But in the process, Ezra has to rescue another kid who’s going to be taken “into custody” by the Grand Inquisitor along with Ezra, based on how well they’ve been performing on their tests. And a third kid, Zare Leoins, also helps out, because his sister was abducted by the Inquisitor the same way Ezra and his other friend were about to be taken away. But Zare elects to stay behind, and continue in the Academy in the hopes that it will help him unravel the mystery of what happened to his sister.

In this episode of the podcast, we also flashback to the frenzy that erupted over Zare Leonis, and whether he was, in fact, a young version of Finn from The Force Awakens.

Today’s question: How many stormtroopers drag Poe over to Kylo Ren?