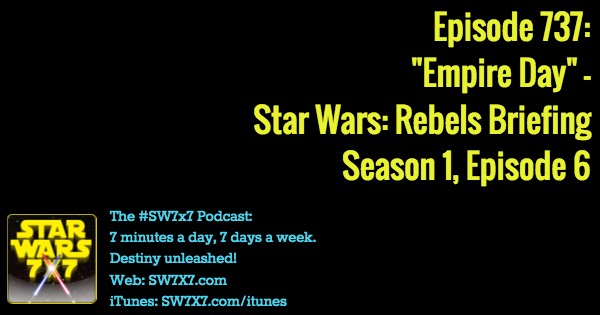 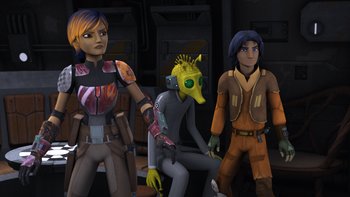 Welcome to another Rebels Briefing! This time we’re looking at “Empire Day,” that being the sixth episode of season 1 of Star Wars Rebels.

During the Empire Day celebration on Lothal – the 15th anniversary thereof, which puts us roughly four years before the Battle of Yavin – we find out that Ezra Bridger is also now 15 years old, and that his parents were abducted by the Empire on his birthday years ago. But their fate – why, where, and if they’re still alive – is unknown. But it turns out that an old family friend may know the truth, and that friend feels guily for not having done anything to stop it or say something about it.

Complicating matters, that friend has a cybernetic brain implant that contains sensitive Imperial information, and he’s on the run. The Ghost crew gets a hold of him, and tries to escape Lothal with him (having already destroyed the debut model of a new experimental TIE Fighter during the Empire Day festivities). Chase scenes ensue, and they get off planet, but not without a tail – the Grand Inquisitor in another of the experimental TIE Fighters, along with a few wingmen.

Unusually, this episode ends with a hard “To Be Continued” screen, despite the fact that many multi-episode arcs in the Clone Wars series never had that card played. Was that jarring at all for you? And what did you think of the episode overall? Have your say in the comments!

Yesterday’s answer: The pull to the light

Today’s question: How many times does Kylo Ren throw a tantrum and destroy equipment with his lightsaber?