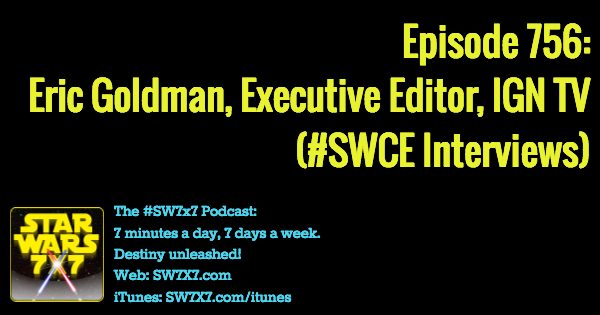 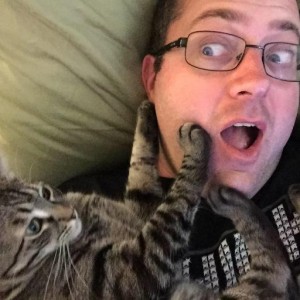 The thing I didn’t mention in the podcast today is, when I saw Eric Goldman sitting on a bench in the main hallway of the ExCel Centre, I wasn’t perfectly sure it was him because of his Twitter picture, which I’ve got right here. It was the lack of a cat – if he’d had the cat with him, I would’ve recognized him immediately! 🙂

All kidding aside, I’d actually been looking for Eric with a camera and microphone setup, seeing as how he’s the Executive Editor of IGN TV, and that’s the way I’d seen him at Celebration Anaheim last year. (And, if you check out his Twitter feed, how he was rolling at San Diego Comic-Con.) So I did a double-take when I saw him sitting unobtrusively with his laptop, typing away.

I like doing interviews a lot, but there’s something about interviewing the interviewers that I especially enjoy. So I was pleased as punch, you might say, that Eric took a moment to chat even though he was undoubtedly rushing to complete this story right here.

It might not come as a surprise that his answer to the question “What’s most exciting about Star Wars right now?” involved Rogue One, considering I asked him the question not long after the Rogue One panel, but his reasoning is that of a longtime fan who’s getting a shot at something he’s been hoping would happen for quite a long time. Have a listen!

Also in this episode: There’s a new wild theory going around that Rey is Palpatine’s granddaughter. The logic presented jumps to a lot of conclusions, but ultimately there’s one glaring thing not discussed in the theory that makes this theory practically impossible to get behind.

It’s the age gap – Palpatine was approximately 88 years old at his death, according to Wookieepedia (Legends pegs it at 86), which would have made him 118 (or 116, pretty close) at the time of The Force Awakens were he still alive. At that point, a person of Rey’s age should have been his great-granddaughter at the least, or likely his great-great-granddaughter. Which begs the question – where are the three or four generations of Palpatines, that we’ve never seen or heard of before, that would have to exist for there to have been a Rey in the family?

Even in the Legends texts, there’s never been a reference to Palpatine having a wife or kids. So, I’m not buying it. But that’s my take. What do you think about the theory? Share in the comments!

Today’s question: How much did Rey claim her parts had been worth the last time she’d traded with Unkar Plutt, upon hearing that half-portion offer?