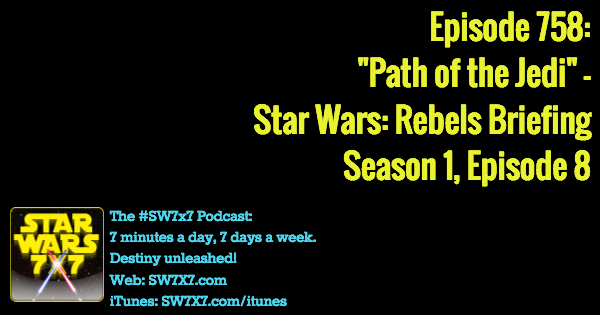 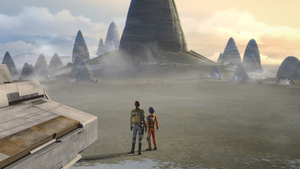 We’re back with another Star Wars Rebels Briefing! This time we’re looking at “Path of the Jedi,” episode 8 from season 1. It’s another milestone moment in the series, as it brings back not only a classic character, but a classic voice as well. Frank Oz does the voice of Yoda in this episode, and by the way, Frank Oz doesn’t just “do” Yoda – he won’t do the voice if you ask him to, like it’s some sort of party trick. He only performs it for the real deal.

Meanwhile, in brief: Because of the Dark Side connection Ezra made in the last episode, “Gathering Forces,” Kanan decides it’s time to take Ezra to a Jedi temple and see whether he’s ready to become a Jedi. (Here’s the full episode rundown from Wookieepedia, where the pic comes from, too.)

At the temple on Lothal, they find the bones of old masters who died waiting for their Padawans to make it back out of whatever tests the temple created for them. Cleverly, it seems as though Ezra fails and wakes up back in the Ghost, but it turns out that it’s a vision within a vision within a vision again, until finally Ezra faces the Grand Inquisitor unafraid, and the killing blow turns out to be the end of the vision.

That’s when Yoda “appears,” represented by a series of floating lights. He speaks to Ezra this way, but is just a disembodied voice when he speaks to Kanan. For Ezra, after questioning him about his reasons for wanting to become a Jedi, Yoda (though not identifying himself to Ezra) somehow triggers the delivery of a kyber crystal to Ezra for building a lightsaber. For Kanan, Yoda warns Kanan that this is his final chance to stay on the path of the Jedi. Not that he would become a Sith, per se … it’s not like you’re either good or bad with nothing in between.

Today’s question: What were Kylo Ren’s last words to his father?