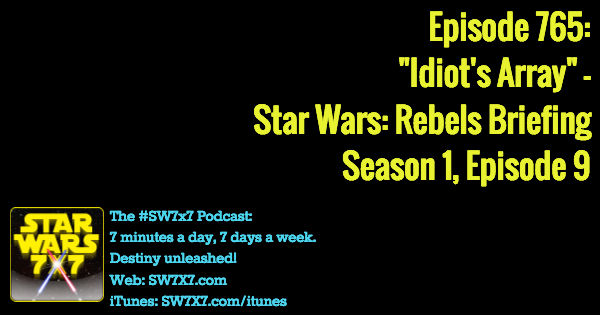 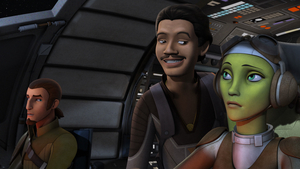 It’s time for another Rebels Briefing! This episode, we’re talking about “Idiot’s Array,” which is episode 9 of season 1 of Star Wars Rebels.

This episode has the distinct pleasure of welcoming Lando Calrissian into the cast of recurring characters for the show, with Billy Dee Williams providing the voice of the smooth-talking scoundrel. (That’s him as animated from the episode, via Wookieepedia, where you can read the detailed episode rundown, too.)

Let’s be honest – Billy Dee has lost a step. I say that having listened to Hall of Fame baseball announcer Vin Scully over the years, who is currently on his 67th and final season calling the play by play for the Los Angeles Dodgers. He’s still mentally sharp, still does his job extraordinarily well, is still meticulous about his preparation. But if you’ve been listening for a long time, you can hear that he’s not as vibrant as he used to be. There’s a dip in the energy he’s able to bring to the broadcast, and I’m hearing the same thing with Billy Dee.

That said, he seems to be using it to his advantage (or he’s been directed to do so), with a more lazy/laconic style of dialogue delivery that actually seems to heighten the faux sincerity of the smooth-talking lines he delivers to Hera and Sabine, for example.

As far as the episode goes: Zeb loses Chopper to Lando in a sabaac pot, and Lando offers to trade Chopper back in exchange for help with a cargo pickup. Problem is, Lando doesn’t have the credits to buy the cargo of “mining equipment,” so he offers Hera as a slave in payment, pointing out the escape pods to her in the process.

Lando gets the shipment, Hera smacks a few people around, and escapes back onto the Ghost to give Lando what for. But on the way back to Lothal, the “equipment” – actually, a puffer pig – gets scared and puffs up, causing a bit of trouble when the Ghost has to run the Imperial blockade to get back onto Lothal.

Naturally, they make it back to Lando’s farm – where they find the crime lord and his gang waiting in ambush. A firefight ensues, during which the Ghost crew dispatches a couple of thugs and sends a few others, along with the crime lord himself, running away to fight another day. Meanwhile, during the melee, Chopper steals fuel from Lando, and the Ghost crew thinks they’ve put one over on Lando. But as they leave, Lando quietly confesses to his puffer pig that he knew they stole the fuel containers, and that would serve as their payment for helping Lando get the puffer pig. (And, giving Chopper back, too.)

What did you think of the episode, and of the return of Billy Dee Williams? Have your say in the comments!

Today’s question: What reason does Poe give for letting Finn keep Poe’s jacket?