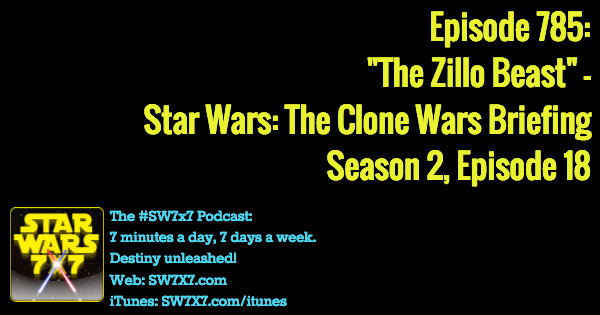 Welcome to another Clone Wars Briefing on our Star Wars podcast this week! Up on today’s episode is “The Zillo Beast,” the 18th episode of season 2. (That’s a pic from the episode via Wookieepedia; here’s the full episode breakdown.)

In brief: The Republic needs the fuel on Malastare, but the Separatists are committing heavily to get it. The Dugs (yes, Sebulba’s species) want the Republic to rid them of the droid army before they’ll sign a treaty. So the Republic drops an experimental electro-proton bomb on the droids, which short-circuits them, but doesn’t harm Dugs, clones, or the Jedi.

The bomb works as planned … at first. But it creates a massive sinkhole, killing a bunch of clones, and the search parties then go missing. Why? Because out of that sinkhole comes the Zillo Beast. The Dugs now want the Jedi to kill it, or no treaty. Instead, the Jedi stun it into submission and think they’re going to release it on an Outer Rim planet. Instead, Palpatine orders it shipped to Coruscant for study and research, since its hide is so strong, it repels even lightsabers. This seems like a bad idea, especially when the next episode is called “The Zillo Beast Strikes Back.”

And best of all, R2-D2 saves the day again, by saving Anakin’s bacon not once, but twice during their attempts to distract and avoid the Zillo Beast while Mace and the clone troopers with him fled to safety. What did you think of that? Was this one of Artoo’s best rescues yet? Have your say in the comments!

Yesterday’s answer: A giant chasm ripped open by the attack on the thermal oscillator

Today’s question: Who helps Rey get Finn safely off of Starkiller Base?