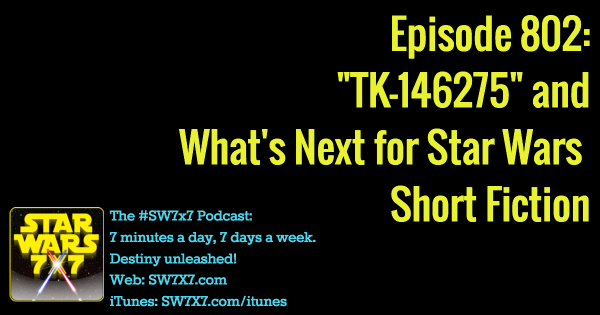 Welcome to our last look (for now) at Star Wars short fiction published in Star Wars Insider magazine! I say “for now” because there’s only one other story released to date that we haven’t yet talked about on the podcast, and yet the titles and general subject matter of the stories for the next few issues have already been announced:

But as for this episode, we’re looking at “TK-146275,” a short story by Sylvain Neuvel. It’s both a stormtrooper’s origin and destruction story, set during the “Dark Times,” if you will, between Revenge of the Sith and A New Hope. The inciting incident itself is a rare one (or at least, it is in the new canon). The rebellion, trying to steal air scrubbers from an Imperial outpost on Eriadu (Governor Tarkin’s home planet, by coincidence) accidentally kill an innocent girl in the failed attempt. The girl’s brother grows up wanting to kill rebels in revenge, and gets his chance when he becomes a stormtrooper.

Unfortunately, being a stormtrooper isn’t all it’s cracked up to be. He’s hazed terribly in the academy, and after graduating, is little more than a local police officer, all of which does nothing for the rage that’s been building inside him over the years. Finally, he goes on a deployment to Lothal (yes, the Lothal from Star Wars Rebels), and here, at least, he starts to see that things may not all be black and white in this growing war.

But finally, in a confrontation with townspeople on Lothal over a stolen shipment of kyber crystals, TK-146275 shoots a townperson carrying a rifle during a very tense situation. The dead mans’s grieving daughter takes up that rifle and shoots the trooper, completing and restarting a vicious cycle.

Definitely a deeper piece than what usually appears, well executed and compelling despite the lack of “name” characters to get you more easily invested in the story.

Have you read this one? What did you think about it? Share your thoughts in the comments!

Today’s question: Who is seen brandishing a lightsaber during Rey’s “Forceback” vision?