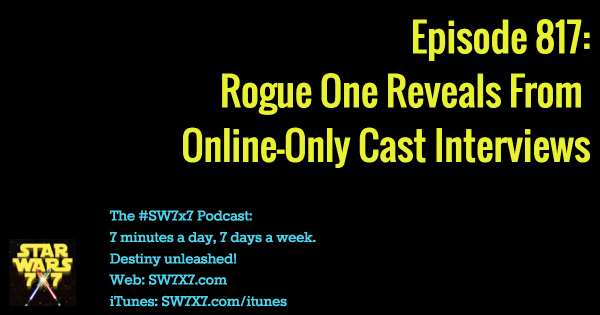 A while back (last month, perhaps?), the cast of Rogue One appeared on “Good Morning America.” But their on-air segment was only part of the story. There were more than 40 minutes of backstage interviews with many of the major players: Felicity Jones, Diego Luna, Forest Whitaker, Riz Ahmed, Alan Tudyk, Jiang Wen, and Donnie Yen, as well as director Gareth Edwards and producer/Lucasfilm president Kathleen Kennedy.

I’ve gone over their interviews and, in the first of two podcasts, I’m highlighting some of their most revealing comments. Today, I’m covering who Whitaker shared scenes with and what the moral dilemma for his actor is, and what secrets they’re able to share about their characters. And I’d love to hear from you – what do you think about the things they reveal? Share your thoughts in the comments!

Today’s question: What does Poe say when he first gets the TIE Fighter to accelerate out of the Finalizer‘s landing bay?