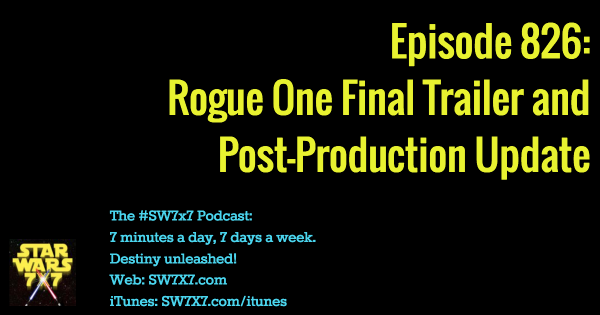 Welcome to another of my Rogue One updates! The fine folks at Star Wars News Net got tipped about a presentation at a Russian trade show that the final Rogue One trailer will be attached to the Doctor Strange movie hitting theaters November 4 in the US, but on October 28 in Russia.

So, this begs the question – when will we actually SEE the trailer? Well, if last year’s timing on the final Force Awakens trailer is any clue, I’m thinking October 17. Here’s why:

–The TFA trailer hit theaters with Spectre on November 6.

–Last year, the TFA trailer came out on October 19, during the halftime of Monday Night Football.

–This year, the October 17 football game features the New York Jets and the Arizona Cardinals.

–So, the same movie theater release timing, coupled with the fact it’s a New York football team (and thus, a tri-state audience) playing on the same Monday night relative to that theater release (three Mondays prior), means that I’m picking Monday, October 17 in the metaphorical office betting pool for the trailer debut date.

How about you? What date do you think it will be released? Have your say in the comments!

Meanwhile, the actress Valerie Kane has gone on record about her role in Rogue One. It’s one that has been known/guessed at/talked about for a while – in fact, it’s a character name that was rumored to belong to another actress in the film, but now we have everything short of an official confirmation from Lucasfilm about this character and role. Check the link for the details (I’m not posting it all here in case you want to avoid the mild character spoiler), or listen to the podcast for my full take on it.

Today’s question: Where did Rey go to get cover from the TIE Fighters while flying the Falcon on Jakku?