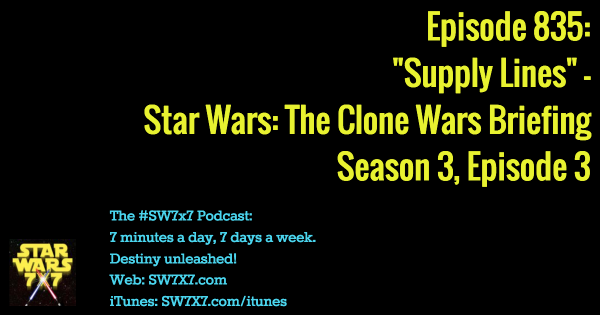 Welcome back for another Clone Wars Briefing! This time, I’m looking at “Supply Lines,” the third episode of season 3, and yet another episode that serves as a prequel to the events of an episode in season 1. (Here’s the full rundown on Wookieepedia, from where the image was sourced, too.)

This time, it takes place before “Ambush,” when the Separatists and the Republic were vying for the support of Toydaria. In “Supply Lines,” the Separatists have invaded Ryloth, and the Jedi and Twi’leks are leading a resistance that’s hopelessly outgunned. For some God-unknown reason, Jar Jar Binks is on Toydaria trying to negotiate a deal on behalf of the Republic, so the Jedi send Bail Organa to take over and appeal to the Toydarian king to let the Republic use Toydaria as a staging planet for sending humanitarian aid to the people of Ryloth.

Of course, Trade Federation Senator Lott Dodd shows up and tries to throw a spanner in the works. He makes the Toydarians officially confirm their neutrality, but the king secretly makes it possible for Bail to smuggle relief supplies offworld. This necessitates Jar Jar wearing a communications earpiece (which he’s touching constantly – totally not obvious). When it turns out the supply ships will have to fly by the window of the dining room where the Toydarians and the Trade Federation, and Jar Jar are having dinner, Jar Jar tries to distract everyone by unleashing a “work of art” in honor of the Trade Federation ambassador. Unfortunately, that involves taking every plate and cup at the diplomatic dinner and dumping the contents onto the floor, then flinging all the cups and plates around like a dwarf from The Hobbit into an unbelievably stacked sculpture.

Meanwhile, Jedi Master Di – that’s pronounced “die,” so that when you learn his full name is “Ima-Gun Di,” you get the pun/joke. Because he actually does die! But he holds off the droid army long enough for the Twi’leks can get their families and humanitarian supplies to safety.

And that’s about it! But I want to know – were you down with Jar Jar this time around, or did he jump the shark? (And if so, when?)

Today’s question: How many systems would the Falcon be scattered across if they don’t deal with the alarm in time while traveling from the Eravana to Takodana?